On September 25th, one of the Austrians MC the   Kärntner Kradreiter    initiated the very first Ride4Hope in Austria for the childrens cancer organisation.

Who was with them? Me! I did wear my WIMA shirt, as I did on all charity occasions so far.

Olpo had his Big Enduro, not a bad choice , considering that we would have to travel over short passages of gravel road too.  …

We waited for a short period, but as nobody else arrived we started our journey via Grub, Mayerling, Weissenbach, Steinwandklamm, Pernitz, Klostertal, Semmering, Pfaffensattel (bad road condition) in direction to Birkfeld.

Olpo stayed behind trying to fix the carburetor, and I tried to regain some time on my further way to Bruck/Mur via Birkfeld and Strassegg. Not even a street parade of a local music group could stop me for long. 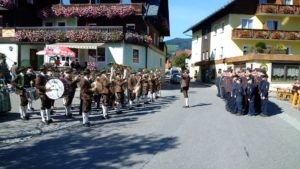 and so I arrived right in time at Bruck/Mur. 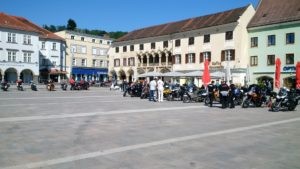 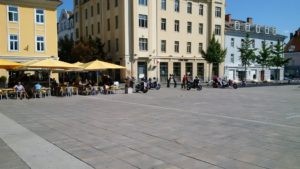 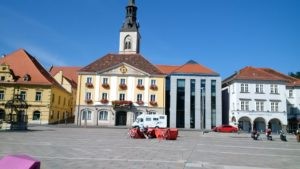 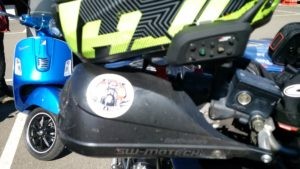 There I did met Martin (whom I did know from my 1000PS Week) and a lot of other fellow bikers.

the sun was shining plesantly, temperatures had risen too, so we waited there in a coffee bar for the event to start.

After some time Olpo arrived!

He really had removed the tank on his bike, disassembled the carburetor, cleaned it, reassembled and attached it again, – and, as he already had access to the engine now, also adjusted the valves too – all this, aside the road. A real Genius!

And so we together, started in a convoi to Leoben, where we were greeted by a representant of the local child cancer organisation to hand over our collected money. 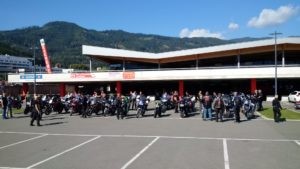 Due to the success of this first ride it will now be done on a yearly base. More here

After this official part, we splitted from the main group and traveled to the city center of Leoben (i travel through every year on my way to the iron mountain, but never had time to visit the center).

finally, after a glance on the clock, we mounted our bikes again and started our trip home. Only with a few modifications of the track. 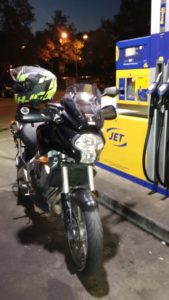 Tomorrow morning I will have to leave early for the Panonnia race circuit. So sleep well!