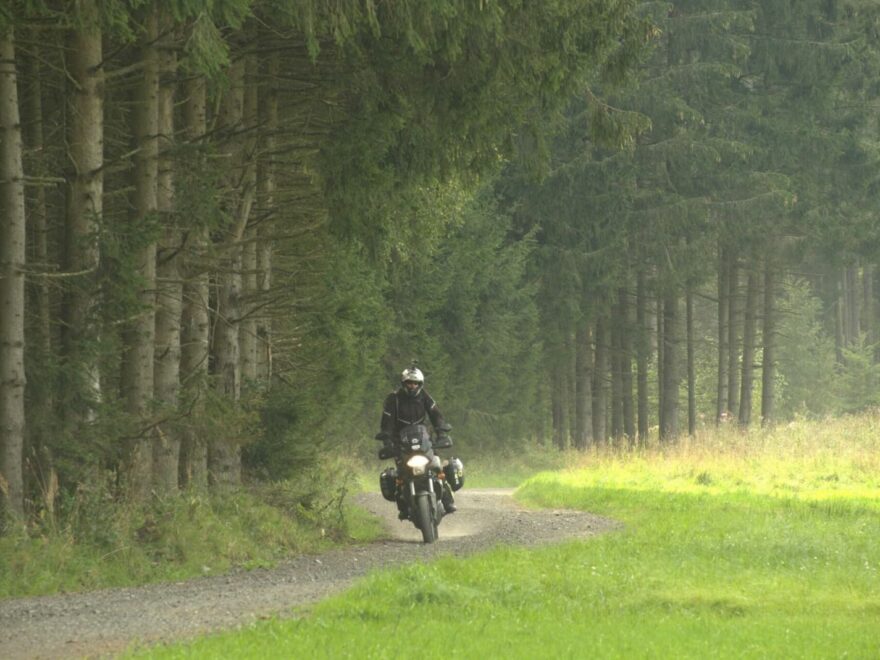 It was a fresh night and so I am glad when I notice that the camp is slowly waking up.
I went to the washroom and scared off a hornet that was hovering around.
Oi, these things are big here! The camp itself has an amazing, prime infrastructure. Normally used as a children’s camp, it offers a lake, large rooms for eating and indoor games, as well as the camping area. The breakfast buffet is just as sumptuous as yesterday’s dinner, and the groups are already having lively exchanges about the individual rides.
Something I didn’t mention yesterday, which I ruefully have to mention now:
That such a faux pas just happened to me, omg
The term Adventure Rider is a little misleading, especially in this case, there are actually enough female Adventure Riders 😉 on site – in this respect, the English language has a much easier time being perceived neutrally.

Bea, Claudia, Heather, Claudia (2), Verena, Faja , that is probably the even bigger surprise of yesterday. Even though I know all the videos from their many travel reports, in the flesh it’s a completely different story.
Today’s programme is the Waldviertel on Off- and Onroads: But first there is the big motorbike parade.
An impressive collection of BMWs, Honda’s, as well as a KTM and a Kawasaki, lined up like this 😉
And, which one stands out once again?
No, it’s the 1290 KTM! 😛

Apparently the stand switch is defective and because it is a super-modern motorbike and therefore a bus system installed, it is not so easy to bypass it. It took a complete reboot of the motorbike to get it to start and ride with us. 🙂

And so we set off, in 2 groups, on separate paths, large and small, asphalt and gravel, from Allentsteig to Grein. (via Rappottenstein, St. Thomas) Where we meet almost exactly on time with group 2. As the queue in front of the Schörgi is a discouraging, this time we buy an ice cream from the neighbour (Meli) and were very positively surprised!

The route back to Allentsteig via St. Georg and Rappottenstein is again very varied.
There are always photo stops along the way to capture the ride in photos. There are also plenty of videos recorded.

Back at the camp, we take advantage of the beautiful sun and dare to jump into the pond.
Oii, that’s really fresh! 🙁 It’s funny, there are always warm areas followed by frosty cold sections. I wonder if they are springs.

Outside the water it is warm enough to get dry again thanks to the sun, but the chill is slowly creeping back in.
So we get dressed again and go back to the campfire!
There is also an all-inclusive evening program today! The season is coming to an end, the supplies have to go and it is amazing how many alcoholic supplies there are still left in the youth camp 😉

However, I assume these were procured at the same time as the barbecue sausages and pieces of meat 🙂
And so nothing stands in the way of another cheerful and lavish feast, peppered with anecdotes. This time it’s going to be a bit later, but tomorrow is a free departure after breakfast, so no problem.