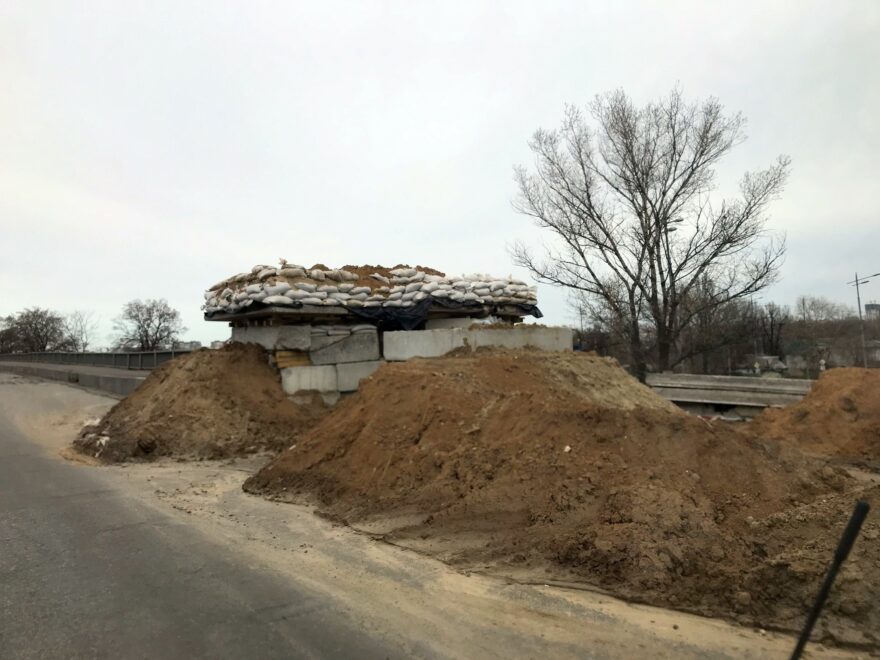 Wake-up for me is at 6:30 a.m., followed by a cat wash, a short inspection of the vehicle (the potholes were not exactly harmless yesterday), then I wake up Olpo. We can enjoy a short breakfast (coffee and tea) before continuing north over the Carpathians towards Lviv.
In the Carpathians, the checkpoints begin.

They consist of a wide variety of materials, sandbags are always there, but also wood, concrete (slabs), tarpaulins and camouflage nets.  Many of the camouflage nets are handmade and come in a wide variety of colours, yet the camouflage effect is surprisingly good.
Every now and then, a bunker is equipped with a stove, the stove pipe then looks out of the bunker somewhere and smokes. But this is necessary because snow falls from time to time.
Upstream or downstream there are tank barriers and S-obstacles that restrict the vehicle’s path. Without power steering, this is sometimes a strenuous task with the IVECO.
These checkpoints are obviously manned by regional defence units. Mostly men of all ages and occasionally women. In addition, police units are also present from time to time. The armament consists 99% of the distinctive Kalashnikov rifles.
Just as the main roads are occasionally obstructed by checkpoints, ALL access roads to towns on the left or right are blocked by barriers or additional checkpoints.
To see a country in such a state of alert and defence is a completely different impression. And we are still hundreds of kilometres away from real fighting.

So we slowly work our way north and manage to find 20 litres of diesel at a petrol station.

Now, please, at least another 20l around Lviv, and the journey is saved.
There was a fundamental discussion beforehand whether we should better take the shorter route (via Ternopil) or the faster route via the “motorway” Lviv, Rivne, Schytomyr, Fastiv, Kyiv, which also brings us into Kyiv from the south-west.
The probability of finding fuel on the main highway route was and is higher, so we chose this route.
Shortly after Lviv, we have another chance to fill up with diesel and another 20 litres raise our tank level to an amount that makes the outward and return journey possible now, as we still have another 140 litres of diesel in our canisters.
We give Alena a heads up that she can definitely count on us and drive on, kilometre after kilometre, checkpoint after checkpoint.
It is an interesting area to see here. Many fields that seamlessly merge into moors, lakes in between, everything still looks relatively untouched. Here and there also small pieces of forest

After this short interruption, we continue eastwards, and one visit to the toilet has to be enough. We take this opportunity to give a stray a little water, and we continue again, always further east.

The checkpoints and positions on the left and right of the highway become more and more, the installations are solved very creatively. The local advantage is often noticeable. No convoy of vehicles passes unmolested here, that much is certain. After Scytomyr, we turn south to come in a curve via Fastiv (Фастів) from the south-west to Kyiv.  The western approach would take us south of Irpin (Ірпінь) into the Svyatoshyn (Святошинський район) rayon, where, as we know, the fighting ended only 2 days ago (Butsha – Буча is on everyone’s lips), and we are not allowed to go there, nor do we want to.

The route is peppered with an increasing number of damaged houses, bridges and heaps of emplacements that are stretched across fields and thus connect sections of forest. We are travelling along a frontline, where scattered soldiers of the Russian army are supposedly still moving around. The density of the checkpoints is correspondingly high and the clock is ticking. According to our information, the curfew in Kyiv starts at 19:00, and it is becoming increasingly unlikely that we will make it. There are enough hotels in the south-west of Kyiv, so we already plan a stop just before the city limits, but to be on the safe side we also call Alena to let her know. From her comes the relieving news that due to the changed conditions around Kyiv, the curfew has been moved to 21:00. We should be able to make it.
And we continue south on this grotty road. Holes are always and everywhere present on Ukrainian roads, but this is another showcase pothole road.  Any gravel road would be better. It’s a wonder our axles and rims are still intact. Despite its age, Olpo’s IVECO is built very robustly. Thank God.
These 40km to the south-east are imprinted on the spine, but they too come to an end at some point and we head north-east again on better roads, ever closer to Kyiv. Checkpoints there too, of course, and also trenches along avenues, across lanes and parking areas, and in between us and yet also enough cars to take their drivers to the place of daily business or need.

It is 19:40 when we cross the bridge on the Dnepr, the high-rise buildings of the Darnytsia district (Дарницький район) are already clearly visible and somewhere in the middle of the houses is our destination. The shelter of Alena and WIMA Ukraine.
I switch on the live location function on Whatsapp so that Alena can see our approach better. Internet costs extra in Ukraine, some providers have included Ukraine in EU roaming, but this is so unclearly defined that I prefer to be careful and use data roaming very carefully. And, really, Kosta is already waiting, to guide us the last 50m to the car park.
We are there!
Since there is a curfew, we immediately start unloading the goods we brought with us, the fuel canister and also the goodie bag into the shelter.

The Schelter is actually a former cellar bar for motorcyclists, which has been equipped with a shower, toilet, emergency generator and kitchen since 24 February, so that several people can be well accommodated in the spacious cellar rooms.
At peak times in the last few weeks, up to 100 people found shelter here.
At the moment it is quieter again, as the bomb and rocket attacks on Kyiv have decreased considerably. (But in two days it will start again, and Darnytsia is also one of the targets of the Russian attacks).
We let Alena show us the whole facility, it is impressive what they have created here to make life in the basement possible. Then there is a quick shower for us, which reawakens our spirits.
Alena has cooked and so we enjoy – I would describe it like this:  Rice with vegetables, spring rolls filled with cheese and fried chicken. All of it tastes delicious!  I haven’t eaten anything except for 2 muesli bars, in the last 48 hours. It was high time, my blood sugar was already alarmingly low.

We sit together until about 11 p.m. and learn a lot about the current everyday life of Ukrainians. How the other WIMAs in Ukraine are doing is also a topic.
It is refreshing to hear that the will to fight and the spirit of resistance of the Ukrainians is still unbroken. They compensate for the difficult phases and news with jokes. Thank God the Russian army – despite all its cruelty – provides enough material for this through its incompetence. But one notices the tension that prevails on the ground, it is not easy to live this life, that much is always evident despite the cheerful mood.
Another item on the agenda is the greetings we bring from WIMA’s international support committee, and also the goodie pack.
The pack includes on one side a complete set of WIMA stickers, patches, flags and T-shirts, as well as Easter greetings.

And, a private part sponsored by me (and partly Olpo) for your brother who is currently deployed in Odessa.  It is a complete set of equipment that is intended for deployment and will specifically protect the upper body and head from shrapnel and shelling.
Her post on FB about this broke my heart when she described how her brother is currently equipped. I personally wanted to change that. It took me 3 weeks of research and patience to acquire all the material in good or new condition.

It seems that all stocks have been emptied in half of Europe. Lady…. is silent about the expenses necessary for the procurement.
Then it’s off to bed.
The night is fresh, but not cold. It is quiet and sleep time is short again, of course.

PS:
Since my last post (part 1) of this ride, the hacker attacks on my site have increased noticeably.
But, dear orcs, the site is well secured and not worth the trouble 😉