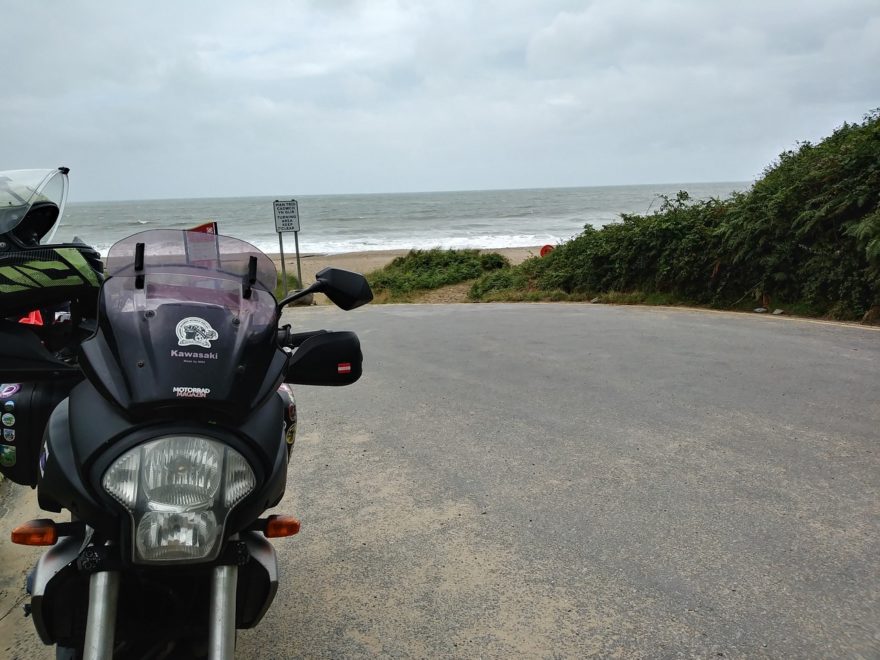 After yesterday’s daily stage, it has to be a little more comfortable day.
With the exception of the boots, the gear  has become completely dry.
My “drying station” has worked.  🙂

I start early, without breakfast, all shops are closed, and the streets are empty.
Today I have the only big city on the way and I want to pass it early.

It is still fresh, but since it is drizzling a bit I put on my raingear anyway and so the still strong wind is not so unpleasant. I have to go to Bristol, which is still sleeping, and then over the harbour bridge if I don’t want to follow the Severn River up to Glouchester.

The Prince of Wales Bridge is the right way to get in the mood for Wales. Wind included. The flashing speed indicators for the car traffic – in front of and on the bridge – show 30miles and it is really not possible to ride here without needing 2 lanes at the same time.
Now a sail and I reach Birmingham without a drop of petrol 😉

But as I want to go west, I leave the sail in the tailpack and go on with motor power along the coast towards Newport and then further on north-west.

Of course, again with rain as companion. My boot gaiters, great faupas of yesterday!, are put on this time and so the boots at least don’t get any wetter. From now on, I ride almost only over  very small roads. The rain has become heavy again, but I stop at the Derwydd garage for the first time to fill up my tank.

The gas station is inconspicuous, but on my way to the toilet I find a collection of Superbikes of different brands and decades in the hall behind the gas station.  I talk chat with the owner and he explains to me – in a broad Welsh accent (incredibly difficult to understand) – that he races himself and that this is a collection of his previous bikes.  After that he asks where from – where to and we talk a little while I dry up and defrost. This time I even buy a muesli bar from the shelf. I absolutely need some form of energy for the next stage.

I found a small sand bay on Google. Actually because I thought it was something for a warm day. Well, the weather isn’t exactly warm or dry right now. But I would like to visit this bay on the way anyway.

The Penbryn Beach is only accessible by a 3km single lane access road. There are campers coming towards me and I am thinking about stopping the action, but at the Plwmp Tart (really, no idea how it is pronounced), a restaurant, a small creek flows along the road and the forest is also very inviting. Since, there is the car parking lot there, I am driving alone on this road now.

The road ends directly at the sandy beach in a small reversing place, where I briefly park at the edge.

The sandy beach is relatively large, but is bordered on both sides by protruding cliffs.
A path with natural stairs leads up to a hill, from which surely a better view would be possible. But I spare  the ascent.
The fresh breeze of the Irish Sea is enough to reawaken all spirits and reminds me of our stop in 2017 at the Curonian Spit.  I imagine that I have seen two water fountains outsideon the sea that could have come from whales, but due to the rough sea I am not quite sure.
So, I revel in memories and the fresh impressions and make my way back to the A487.

There I turn left and continue towards Aberystwyth (Aber-Ystwyth – The mouth of the river Ystwyth)
The city is located on a beach promenade of approximately 3 km length, which is closed in the north by high cliffs, the Constitution Hill. A funicular railway leads up to the hill. I think the view from up there would be nice. But right now clouds and haze are hanging much too low to have a nice photo view. Anyway, the price for the cable car would be moderate.

While I am taking pictures on the beach promenade a bum stalks my bike, eyes it and then comes towards me.
I still think to myself, hmmm? Then he speaks to me in flawless German and explains to me that he has already been to Austria and how he liked it there. At first I am a little baffled. But we talk for a while and I find out that he worked in a Bavarian brewery but then wanted to go back to Wales. But then he experienced that  the English beer had nothing to offer. Too. At least I can understand that 😉

We say goodbye, I “fill up” a bar of  Cadbury Chocolate in the village before the journey continues north for me. The last part leads me to Tywyn, a place which is also on the coast and can only be reached by bypassing the mouth of the Dyfi, via the Pont ar Dyfi, far inland.
Logically, the place at the mouth of the river calls itself ?  Oh, come on!   Haven’t you payed attention?`  Aberdyfi  !
But with this, I finish the Welsh language lesson and concentrate on the colourful houses that have created a nice little town here, wedged between the mountains and the coast.

Also the railway line, that has followed the course of the estuary all the time, parallel to the road, has a station here of course.

The place invites to stay longer.  But the weather still doesn’t show its nice side, so I have only the consolation to visit the place virtually via GoogleMaps and the pictures there. I would like to come here again in any case.

But my road continues along the coast, on the left a never ending sandy beach, on the right the foothills of Snowdonia NP. The area becomes more and more inviting.  In Tywyn I turn back inland, not without having refueled the bike and found a place to stay.

During the day, and after the latestest news and weather forecasts,  it is clear that the soil is soaked by the meanwhile 4 weeks of continuous rain in the region that I sink with the motorcycle and tent when I leave the road.
Therefore, as long as I still have data reception, I change my reservation in Castleton from tent to room and book a room for tonight in Minffordd.
Because the place is in the middle of the NP there are beautiful lakes and mountain peaks to see and to take pictures of.  You cannot expect infrastructure there.

The journey over the last 25km, which is all the time uphill into the valley, reminds me almost of Glencoe. When I arrive at the hotel at about 17:00 o’clock a hiking group is on its way home. One member of the group used to own a Versys and is thinking aloud, due to the fact that my journey was obviously not very short, whether he made a mistake in selling it. I can only say: “YES” 😉

My Versys has now about 90.000 km on the hump, the last regular service in a garage she had at 48.000 km, since then I’m servicing her myself and the §57 sticker (Tüv, Pickerl) was never a problem.   The verdict of the last mechanic was: “Zero valve clearance, no wear on the engine”.  A robust miracle thing, which drives, on top of that (man and woman forgive me the expression) bloody awesome. I can say with a clear conscience: I have never made such a good choice before or after when buying a machine.

The “hotel” was probably a post office station in the past and has flair. As I have not eaten anything except the muesli bar today I am curious about the food.
The leaseholders of the hotel are an elderly couple that increases their pension a little in this way. So it is all the more surprising that in the evening (19:00! -a miracle that the Cadbury survived this) I get a dinner that can stand the comparison with a 3 toques restaurant. And the portion was so enormous that my reduced stomach had to give up at some point. A pity…

Of course, I converted the attic room into a drying room again, also here – laudably – everything is heated very well.
After dinner I use the fireplace room and in front of the crackling fire I write down my experiences of today.