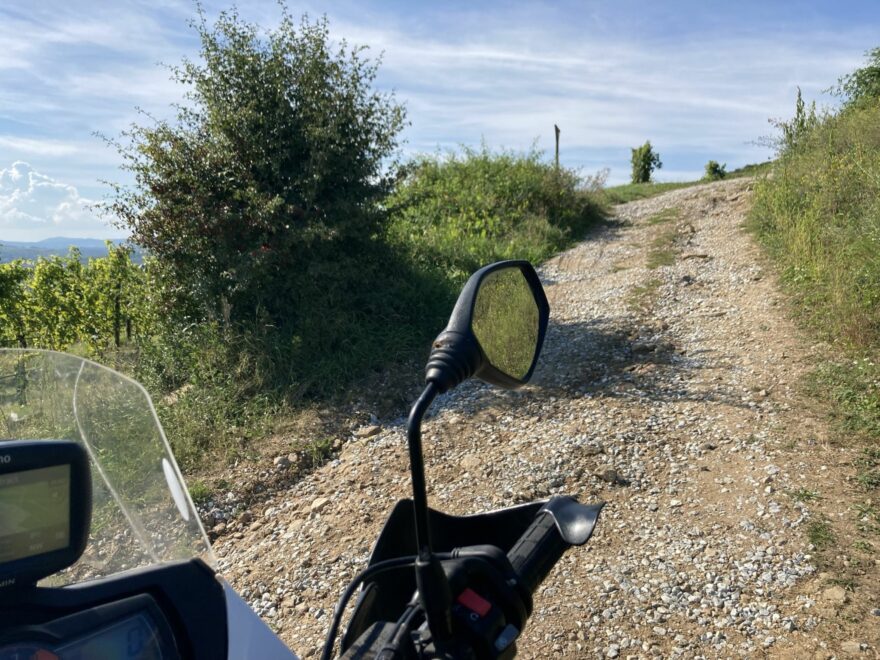 What is a common saying in Austria when talking about the Waldviertel?
“It’s winter there for 6 months, the rest of the time it’s cold.” 😉
So, what could be more natural than camping there in one of the coldest September’s in recent years?
Nothing at all, of course, but nevertheless I am now here in my tent, partly surrounded by the Allentsteig military training area, and am just thinking about how I can make my night even cosier.
It was relatively exactly a year ago that I was here at the youth camp for the first time to indulge in adventure.
At that time I was caught – literally – freezing cold.
Remember: never trust the temperature label on your sleeping bag until you’ve tried it yourself.
The temperature rating on mine: 5° comfort temperature.
Hahahaaa, maybe for a 100kg male, but he wouldn’t have any room in this sleeping bag… 🙂
At any rate, it didn’t feel like being comfortable with 3° at that time, so this time I’m using a double strategy:
1.) The same sleeping bag “hardened” with an additional silk sleeping bag against low temperature. (Thanks Elsbeth!)
2.) An alternative, thicker sleeping bag as a backup, just in case, is also in the luggage.

But what brings me here, why am I here and not somewhere else?
It’s the 2nd Austrian Adventure Rider Camp, and because the premiere was so good (the programme more than made up for the traumatic two nights 😉 ) I’m here again.
The journey is uneventful, the curves of the Waldviertel from Langenlois swing you in so nicely and the joy increases with every kilometre.
I left work early and drove away, so I experimented with random left or right turns (the GPS constantly shows the direction to Allentsteig anyway).
So: A tower on a mountain? That’s where I pass! A gravel road along the way? I’ll take that one.
So the time passes and I spend almost 4 hours on what is actually only a 50km route.
But it’s a good test, because I’m actually travelling in a full load configuration (thanks to a 2nd sleeping bag and the tent), only the weight of the tools is missing from today’s packing list.
It’s interesting to test it out on unpaved roads and also to test the possibility to move on the bike , e.g.: even on longer downhill rides where I lean back standing up, and thus gain a bit more experience.
My tyres still worry me, the glued windshield reminds me of the last unpleasant “surprises” I had with them on wet roads and gras.
Thank God it’s been dry for days, so I don’t expect any mishaps. But I won’t overdo it, because the camp is calling!

Arrived in Allentsteig, we immediately refuel and then ride to the camping area. A blue Tenere 700 travels the same way, hmm probably a colleague 🙂
Martin welcomes us and there are already a few familiar and new faces among those present.
Hannes, Wurli, Robert, Benjamin *, Daniel are already there and are setting up tents or sitting in a circle with a bottle of Zwettler. * Tenere 700 and new face for me.
What follows: The tent pitching. This is done without any oh oh experiences. The technology of the dome tents has become so uncomplicated that even two left-handed people could do it.
Inside, everything is comfortably furnished and the tried and tested tent layout is used again.
Only this time I definitely need space for the boots in the tent. An awning is definitely not an alternative with last year’s experiences in mind – cold, damp boots in the morning, dispel neither sorrow nor worry 😉

The backup sleeping bag is also positioned within reach in case I need it tonight.
Then we join the others and with the sun gone, the cold slowly creeps in.
The campfire is lit and there is the sandwich effect: hot in the front, cold in the back, but I already know that from the scouts, so it’s really not a new surprise. Just put a few layers over it, it’s fine.
So the evening passes very quickly and at 23:30 I retire. If anyone is wondering what was discussed and experienced around the campfire, I’m afraid I have to disappoint the p.t. reader:
What happens in Allentsteig stays in Allentsteig.
Or, as my brother (in the army) puts it: Here everything is veeeeerrryyyy secret. 🙂
One solution would be to come along yourself next time 😉

The next morning starts fresh, as expected, but the sleeping bag has held up, the night was relaxing.
Although I imagine I still hear voices coming from the campfire at 1/2 4, but that can only be my imagination, can’t it?
Wrong, as I learn at breakfast. Side note (not the last) We are on an adventure camp – so we don’t cook ourselves, it’s more or less an all inclusive stay with food etc….
I see it as an environmental contribution 😉 (because it’s so popular at the moment) , all the gas, packaging waste, etc.. that would otherwise be generated, all that is reduced this way and we support the regional economy, so it’s a classic win:win situation 😉
So, we hardy Adventurers sit down to breakfast and so we find out who, until when, has not left the campfire, and indeed at about 4:00 the last ones were really in the sleeping bag.

There are several routes to choose from, the dirt roads are generously left to us and so the Woodquarter becomes our playground for the next few hours. There are wonderful stretches with unpaved roads and many a hanging bend with loose scree.
This is fun and we often make use of photo stops because of the many impressions.

later in the afternoon, we emerge from the bushes back onto the streets in the lovely village Spitz and make our late midday stop there, which is a pleasant contrast to the morning cold, in the hot sun.

Hidden by the inn, however, a dark grey rain cloud creeps towards us, which we thus only notice relatively late. It is already clear that we will not escape the rain, but we (carelessly) assume that the showers will be moderate and not constant over us.
We set off still dry, but in Weissenkirchen we get the first raindrops, up at Seiberer it is already raining and getting heavier. Like a carrot on a stick, there is another blue hole in the clouds further north, so we set course on it. It’s already too late for the rain gear, but the rain doesn’t get any less. So the Alpinestars Andes kit has to show what it can do (it can) .
So it goes with once more, then less, then sun again, then rain and sun again back to Allentsteig. Just enough to dry the clothes and dust them off 🙂
Arriving at the campsite, a cloud covers the place and the rain doesn’t stop for the next few hours.
It is not until later in the evening that we manage to start the fire again and this time it is also a long night.

This one is even more comfortable than the first, the temperature never drops below 6° and, although it is still quite humid in the morning, the sun soon breaks out between the clouds and dries most of the gear at least to such an extent that it is reasonably uncomplicated to take down and pack the tent and the rest of the luggage.

After the big farewell lap, it’s back to Vienna.
This time the special task is to take as straight a route as possible to Tulln, no matter what the road surface.
A piece of cake 🙂
Even with a MITAS E07 (no Plus, or Dakar) tyre 😉