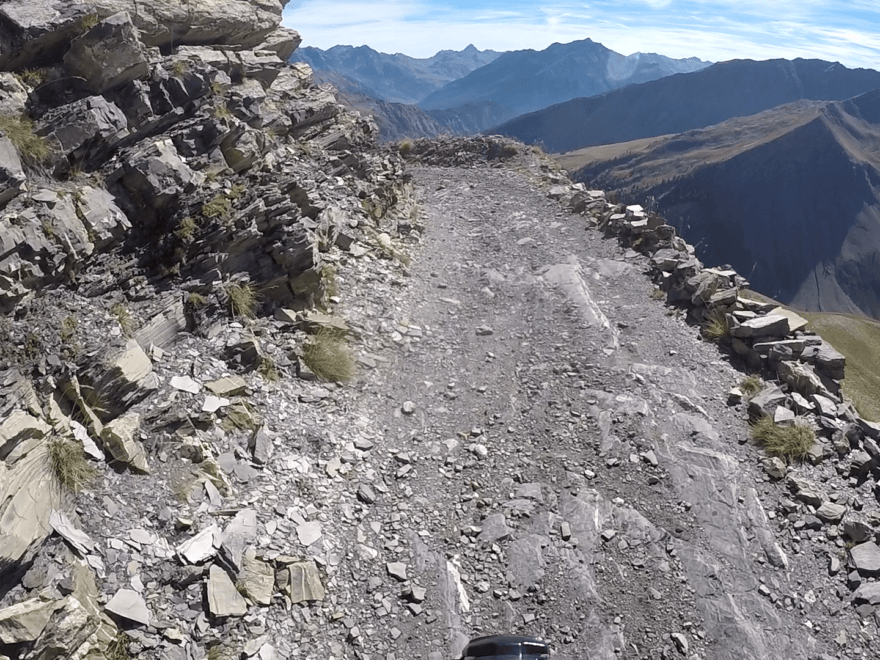 Oh, là là!  What was that?
Somehow I still tumble from one curve to the next. Doesn’t that stop at all?
With that I could finish the story about the participation in the French Wimas National Rally.  Everything is said. Everything?

No, just like a Gallic resistance dwelling (but that’s another story) the Wima Frankeich rose from its remains and set a strong signal for a new beginning.
Their invitation went to all countries and of course who was there?  Me! 😉

Can I speak French? non

Have I been there before? non

Do I have maps of southern or western France? non

but thanks to Euro I don’t need it anymore 😛 , finally a Qui!  We are going!

So the decision process started and a “little” curiosity was of course also included.

For time reasons, the first part of the journey was with the transporter in which our motorcycles were stowed. But starting from the Swiss border we were on our two wheels and stagger since then on endless mountain routes over one mountain pass after the other. We decided to take 4 days to complete the journey to Embrun. That’s why we can now take full advantage of the route.
Klausenpass, Furka, Gr. St. Bernhard, Kl. St. Bernhard, Col de Iseran, Breakdown 😉 , Col de Telegraphe, Col de Galibier, Col de Izoard, Col de Vars, Val de Ubaye, L’Adroit de Pontis, Embrun, 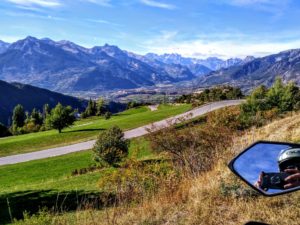 We arrive there in the late afternoon and are already received by the other participants.
The rooms are quickly distributed and we explore the hostel and the surrounding area.
The dinner is classic French and tastes delicious. The atmosphere is very good and we are looking forward to tomorrow’s program.  The day was long and so we soon crawl into our bed.
The next day, after a good breakfast, the spirits are back.  The route is similar to the day before, but in the opposite direction.  Thats why I decide to choose the “direct” route (la voie directe) and shorten it over the Col du Parpaillon.  The Col has a difficulty level of 3-4 and I have road tyres and a Kawasaki Versys at my disposal?  As plus I can point out my Hardenduro practice.  It will probably take some time, because there will be no fast riding on the 35km gravel road and I leave the suitcases on the bike, so that it doesn’t rest completely on the ground in case of a fall.  I really don’t want to lift 220kg from the ground.
I take enough clothes, food and drink with me and I deactivate the ABS on the Versys (pull the fuse 😉 )

The first section, the approach to the gravel passage, is wonderful, the villages are getting smaller and smaller and the mountains in front of us are getting higher and higher. And suddenly there is the gravel road. While driving the first 200m I feel sorry for the Versys and wonder if the idea was really good?  It’s not a gravel road, it’s already a marked wild track. I could still turn around quickly and take up the ride around the mountain range? I would also be so sure to reach the meeting point in time…..
But then the ambition and the curiosity about what’s to come wins, it’s clearly only the beginning, there’s sure to be something more to come. I just want to know now, basta. And of course there is still something to come. Of course the “way” doesn’t get any better, on the contrary, but with time the Versys get used to the unfamiliar terrain and I get calmer and more relaxed again. 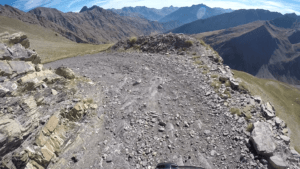 And so we crawl comfortably (average 10-20km) and evenly up the mountain. The WESS prologue experience clearly helps here. The foresightedly driven line saves many surprises and there are many of them along the way.  It takes about 45 minutes which I ride up the mountain standing on the footpegs, before the famous tunnel hole below the ridge appears.  Already there on top are two Swiss with two CRF 250L  and worthy stubble tires on site.  Their looks show a little wonder as the Versys steamboat appears.  When I take the helmet off to – maybe 😉 – put a Wima sticker on the mountain pass sign, they are finally amazed.
I smile silently inside my helmet and start with the passage through the tunnel. The reports on the internet about the passage are all very unconforting.
This is a nature tunnel with alternating dry sections and then again water passages, to the finale also still with clay mud at the “ground”. In colder periods even ice.
Now it’s simply a matter of riding evenly and with momentum. Getting stuck or slipping away wouldn’t be any fun here.  The sun glows from the other side into the tunnel and is a pleasant contrast to the blackness of the 500m long tunnel.
And so after a few minutes I stand on the other side of the tunnel and have a breathtaking mountain panorama in front of me. 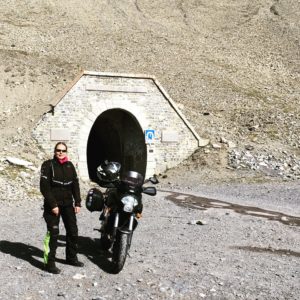 The sun is very intense here at 2600m and it is unusually warm. Actually a good moment to take a short break before the announced, even worser downhill route and taste a little of the packed lunch I brought with me?
Very bad idea Versya, very bad. When I open the suitcase my “food” runs towards me. Briefly summarized: It looks as if it had thrown up.  I quickly close the suitcase again and try to forget what I have just seen and smelled. 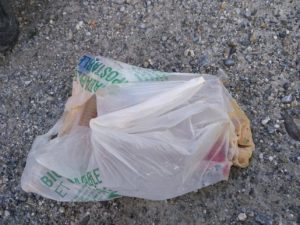 So I have to be content with the water from my camelback. Note to me: Store food vibration-protected safely!
In the meantime also some Swiss riders with Honda Dominators have arrived and I ask them to take a picture of me. I really like to have a proof that I was here (with a Versys) ;-).

After a short rest I start the downhill run and I am glad that I have switched off the ABS. Otherwise I would just rattle over the next crest, but so the rear tires always finds enough grip to keep the track together with engine brake and fine rear brake.    Until, yes, until I, being careless, looking around for a moment and not concentrated, choose the wrong lane which leads me too close to the edge of the curve.
There is very loose rubble, and for all mishap I reach briefly into the front brake, in order not to drive over the crest.
It happens very fast, the front wheel slips away and the Versys tilts inwards. At 220kg there is only one thing left to do: Get away from the bike ;-).  I roll a bit over stones and dust to get up and have a look at the situation. 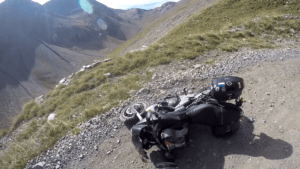 The Versys lies there with the wheels uphill in the curve inclination. Thanks to the suitcase – as planned – at least not completely unfavorable. With my Hardenduro I would turn it first on the ground, so that the setting up is easier, but I do not want to pull the Versys over this stone floor, if it is not absolutely necessary. Now, take a deep breath, look for a good hold on the ground and on the Versys, and get the machine back on its feet. With my first jerk I manage to bring it up to my thigh and support it in this way. Unfortunately, the shoes slowly slip away on this ground. I feverishly look for a new support with my second leg, find it and with a second jerk I bring the machine so high that the weight is taken up by the wheels, so that I can finally bring it into a vertical position. Phhhhhhuhuuuuuuu, the blood rushes in the ears, the lungs gasp, but the Versys is standing. Once again it proved to be a good idea to use the adrenalin rush for action immediately after a fall. 😉 I was looking for a place to drive out the stand and take a deep breath.  Damage assessment: The left suitcase looks badly scratched and a few stickers are offended, the handguard also, otherwise nothing happened to the Versys. Perfect! How does it look with me, briefly one check: Garment? Ok. Helmet? Ok. Camera?  Running! Ah, I got it on video! Yesss! 🙂 On the left palm of my hand a first bruise, I must have had fallen onto a stone.
So I climb up again and simply ride on. Now, of course, more careful again! Too bad, because the area is still worth seeing.  Further down I meet Enduro riders again.  But too late, gentlemen, too late. Actually well so, nobody has seen my mishap.
Nobody will ever know, hrhrhr.

With a nasty grin on my face I drive downhill again more quickly, the road slowly gets better and then suddenly changes into a quite well constructed gravel road. Actually this side is a lot nastier, because coming from here the wide gravel road pretends that there is nothing (worse)  coming. 😉  Now I’m racing downhill again and after another 10 km I reach asphalted paths again. It was nice and due to the short break at the mountain there is still so much time left. So I study the maps and find a pass that we didn’t make yesterday due to lack of time. The Col de Bonette. It is the highest alpine pass of France with approx. 2800m and has another special feature. Its summit is completely surrounded by the pass road (the last part was blown out some time ago and thus the one-way around the summit was created.
I rush up the mountain and then immediately down again, because it is now time to drive to the meeting at the Col de Larche, but as I know the route from the day before, I am ther almost punctually.
The picnic (which I get shared sisterly by others) at the pass is wonderful, the weather is simply unimaginable! again a Wima miracle, it’s the end of September and we sit here on over 2300m and it is pleasantly warm.

I disposed the contents of my suitcase at the parking lot and washed out the suitcase with a bottle of mineral water, I’m just afraid I can’t get rid of the smell anymore….

Of course there is still another group photo with our almost 50 head group and then we start again in small groups back over the Col de Vars and Guillestre home. There is again a wonderful evening event.

But today we keep it rather short, too, as tomorrow we return north towards Albertville, and the next days (now with cool weather) further to Chamonix, Martigny, Gstaat.
On the way there are again many passes and cool routes like: Saint de Appollinaire, Col de Parquetout, Col du Glandon, Col de Fer, Col de la Madeleine Col de la Croix, Sustenpass, Pragelpass, and some in between, which I have already forgotten again….

Once more we meet a Wima France group and spend the lunch break together, then the way separates finally.  In Glarus the search for a Schoggi shop begins, because finally we have to bring a compensation for the last 10 days for those who stayed at home and of course we do find it 😉