Since our WIMA wine county tour, M. and I are determined to go on a one day ride somewhere within Austria.

It wasn’t easy to schedule a common date, but – and this is a big BUT – in the meantime she bought a Versys too. A cute 2010 model in white. She did pimp it a little bit (lower gel seat, rim stripes, etc..)
I must say, I never thought a white bike could look so cool!

Ok, but now there has to be a date, such an opportunity couldn’t be missed.

Finally, we found one! And as I like to have a mot(t)o for a ride, and our bikes are black & white we decided to name it: WIMA Black&White Ride.  YES!!
And, we event took it further, as M dressed up in her new leather racing gear b/w, and me dressed in my completely black standard leather riding gear. 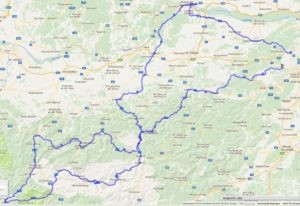 After our separate approach to the meeting point in Krems, we met right at the point at 9:30.
We first filled up our tanks 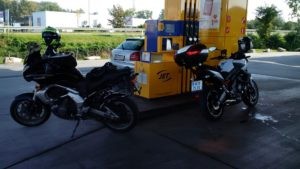 and headed over the Danube to the Dunkelsteiner Wald and through Loosdorf we entered the pre Alps region in a very short time. We had choosen narrow winding roads, but they were built for our bikes and so, kilometres went by very fast. Traffic was low at this time of the day, so we went on flying over the route through Mank, Wastl/Wald, Scheibbs, Puchenstuben, Erlaufsee, Göstling, Weyer, St. Gallen and finally Admont.

We had decided to stop only if necessary to cherish the riding to the max, but unfortunately close to Mariazell we were stopped in a police motorcycle mass control. 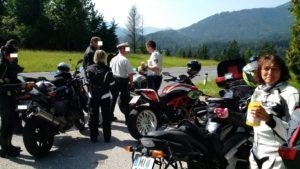 So we had time to refresh our water level and walk a little bit, while we were spectators to the drama unfolding. Some manipulated mufflers, wrong mounted licence plates, run down tires, etc…  later we had the pleasure to be next in the queue.
We were glad to hear, that our bikes were in a completely certified state, and so we were allowed to  proceed shortly afterwards without any penalties.
No surprise there, as our Versys are built for this type of Austrian roads, why should we tune them?  😉 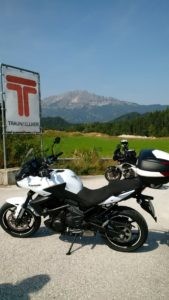 On the way down south we met a lot of motorbike riders and –groups, and, as it come, we had the opportunity to overtake quite all of them. As one of our famous motorcycle magazines in Austria like to call it: We judged them….

On the other hand, the opposite only happened once, or twice, if I count the two male riders each (licence marked with W and BA) overtaking us – and the car column in front of us – within a hairpin bend , admist heavy rain, and opposite traffic, at the steep roads of  Josefsberg.

But,  its their life, so let’s proceed with the report:
At our arrival in Admont (a little after noon) the small town was crowded with bikes from all over Austria. So we went in a small aside restaurant without garden seats to rest a little bit, before we would head back.

This was fortunate, as shortly after heavy rain started to fall and we had time to lunch and talk a lot.

After some time, we wanted to start the engines again, to proceed with our return leg, but the rain was still pouring down, so we had to put on our rain gear and after paying for the meal and drinks we mounted our bikes once again and started our return journey.

It started close to Admont with the Gesäuse, a narrow road between tall mountains, winding along the stone walls and over bridges. As this road is operated under bad weather conditions, the tarmac wasn’t too good at all, and the wet surface did even worsen it.
So we slowed down a little bit until the rain started to cease more and more. As it was still hot, the road soon tried and we, once again, proceeded with our standard speed back to Mariazell. 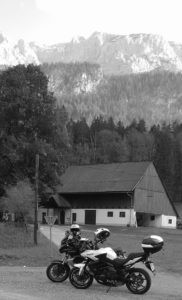 Unfortunately parts of the leg were torn up for repairs and therefore only gravel roads, but, at least, thanks to the rain, it wasn’t dusty at all and so we could experience Australian road feeling admits Austria  😉 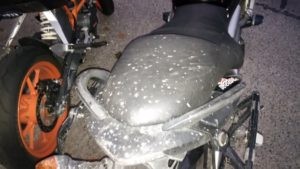 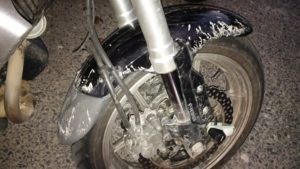 We arrived in Mariazell in heavy rain, the gas station was already crowded with Bikers seeking shelter under the roof, and for the first time refilled our gas.
It was strange, that my old Versys took 12.5 litres and M’s Versys, despite a quite younger model, needed 14.2 litres for the same leg. I suppose it’s due to my bigger wind screen, but otherwise this wouldn’t be logical, wouldn’t it?

This means calculated 5.3l for 100km, not to bad considering our pace and more than 10000m up and down during our 300km trip so far.
Together we went on, with increasing homing car traffic – the bikes where more or less all gone. We had a few kilomters on the same track, we rode before on our south leg, but soon the tracks seperated again and we went on over Annaberg and the nice hairpin bends on the up and even more at the down part, but unfortunately again in heavy rain and car columns in front of us.

At one of the last bends there was an unfortunate Gold Wing Biker surrounded by police, fire squad and ambulance who seemed to be injured as his bike laid aside the tarmac out of the bend. Yes, the roads were very slippery there. Best wishes from us!

At the end of the downhill section, we managed to overtake the cars in front of us, and proceed again in a faster pace back to Lilienfeld (were the rain stopped finally) further on to Traisen, were we parted. M to the North and me to the East.

As the sun already started to set, it was time to check out a new app I found recently:  Calimoto. it promises to find as much as possible curves on a leg between A to B and that was, what I needed now.  Still approx 60km to go, so lets see. 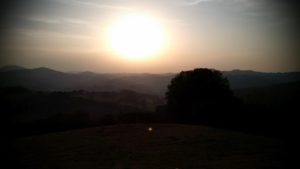 As it found a really nice and winding route back home, I think I will try it on a longer route too, next time.

Maybe together with the other two Versys from WIMA?

Not in black&white then, but colorful could be fun too, don’t you think? 😉