I was at the bike in Tulln on last Saturday
And since I am a Viennese, I am allowed to do this now: I’m bitching (grouching).

Now to the positive:

The fair itself was very well equipped by suppliers and brands, despite the booth of a well-known Austrian motorcycle PS side sprayed the charm of a desolate concrete desert (Cheffe N. must probably have a Scottish or Swabian ancestor). Exhibition stands look a bit different today!
However, most exhibitors had a lively presentation of their products and the audience was very satisfied in my opinion.

Traditionally, the “slightly” gray-mottled, already exceeding the body mass index of 30 men were in the massive over number.
Now and then a junior in the tow, or the pillion, in partner look 😉 and here and there also some motorcycle women! Single or in pairs. A pleasant trend!

But, because of the prices for motorcycles, who wants to blame the young men and women?
In addition to rising rents for the apartment and ever higher costs for cars, who can or can afford the luxury of a motorcycle?
And, after all, it was not a second-hand motorcycle show – although, of course, they were also there 😉

Obviously the brand manufacturers were also present, and to the booth of BMW I have also visited them all. Only triumph I completely overlooked.
But who is thinking about a triumph at a car dealership?
I had the trial sitting planed on a XCA. I have to make up for this. 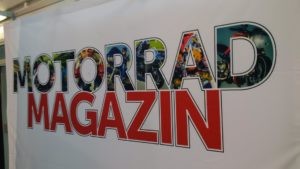 A compulsory visit was also important,  the stand of the austrian motorcycle magazine, which offered a very pleasant atmosphere and invited to the short stay.
Beate was there naturally and so there was the opportunity to chat a little.

Of course, the conversation was primarily around the Ladiescamp, but also the next race track trainings were briefly intersected.

I met Renate there from Wima, she also did the rounds through the halls, Su should be there too, a little later.

KTM did not skip this time at this local show, but it was a little surprising that even Honda had more off-road bikes on the stand than KTM.
As a plus, the Dakar Bike of Matthias Walkner was on site, a really imposing machine. .

here are unfortunately only a very limited number of photos from the whole visit, but for a reason I could not figure out, my smartphone camera was only able to deal with the bright lights on the stands, so many photos have unfortunately only been scraped.

Here are my (few) impressions:

The trade fair was worth a visit, there were a lot of acquaintances to meet and the great opportunity to look a little envious at the many new machines, all of which are waiting to be brought into worthy running.

Where is a loto jackpot when woman needs it!?! 😉