We are really here! As we wake up in the morning, we can’t believe it yet.
2750 km without any big problems, no breakdowns, no accidents, often rain, but also many nice and sunny days.

We’ve seen so much of the countries and the people on the way here. Now it’s time to get to know Estonia! 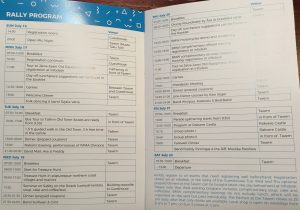 But the most beautiful is, that we can still use today (as arrival day for all remaining Wimas) for more discoveries. The official part of the rally will start in the evening.

The breakfast setting is already working very well, so the  potential has been dramatically improved by the speed and number  of the kitchen crew. After breakfast we mount our now lighter motorcycles and drive eastwards.

There are basically only 3 goals:

The sun is shining, the traffic is very quiet, the navigation was already worked out weeks ago, what could possibly go wrong?

So we set off at a brisk pace, and around Rakvere following the main road. The striking and large castle has to wait until Thursday, as it is the focus of the rally and is therefore only seen from a distance.

So we are quite fast at the turnoff at Sake which leads us towards Velaste. The road is narrow, but has a perfect tarmac and runs in curves along of the steep coastline to the Baltic Sea, so that we can always have a view of the sea. This way we quickly reach Velaste Juga the 30m high waterfall (which is rather unexpected in this flat region) that Svenja has already visited. 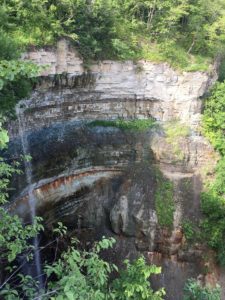 It’s true, the waterfall funnel is impressive, the waterfall rather less, the broken-off spectator platform a little more. It’s a pity that this was not repaired. The locked double spiral of the spiral staircase leading to the platform would in itself be a challenge.  😉

So we look over the edge of the vertical rock, which is completely unsecured. For Austrian conditions completely unthinkable. And judging by the traces, the path to here is frequently visited.

After a short stop in the coffee shop on the opposite side of the road  (WC for all, and coffee for Su and Renate, – I use the sun for a little nap) it goes on along the coast until we are spit out shortly before Sillamäe, again on the main road. From the main road, the slab concrete buildings of the Eastern Block era don’t look very inviting, and so we drive straight on towards Petersburg! Yes, that’s already written next to Narva as the  streets target. 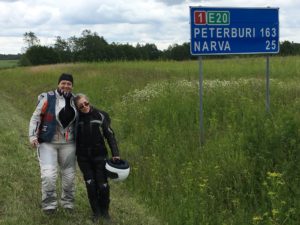 Finally, we reach Narva. The city looks different to the cities we have seen in Estonia so far. Both the size, as well as the dimension of the shopping houses in the outskirts of the city are impressive, and at the same time a little morbid.
We find out later that Narva is very much Russian-occupied, whether this makes the difference?

In any case, we are fighting against the increasing traffic swelling and a breakneck roundabout up to the border crossing.
Massive fences, cameras, barriers, etc… give a very gloomy impression. 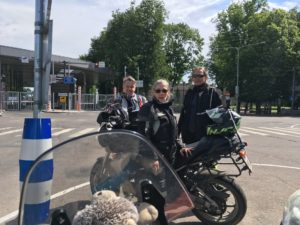 So we’re moving away from the border crossing. We stop at the parking lot in front of it and take our photos from there. Afterwards we cross the roundabout to the southern part of the Hermanns Castle, where we walk from the parking lot to the Narva to see the border river from close up.  The fortress on the Russian shore also looks defiant and huge.  In addition, children are bathing on the shore. Are they aware of how tense the situation in Estonia has actually been since the Crimean annexation?

In the back country, British and NATO troops are practicing for emergencies, hidden in the woods. This is probably only a small hope for the Baltic countries in the event of a hopefully never happening annexation, as the Suwalki Gap is a bottleneck in the connection with the rest of Europe. 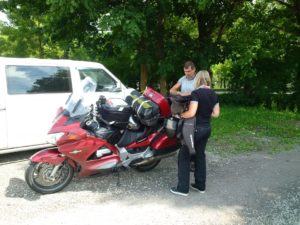 We meet a French couple on a Honda Pan European at the parking lot for the second time, and the name of the motorcycle is their program: For 45 days they have been travelling through Europe, across the Benelux, Scandinavian countries and Estonia you have already come, further south, via the rest of the Baltic States, Poland, Czech Republic, Austria, Italy and back to Paris.

Only at home do we calculate the average of our last days, and are calmed down again.  😉

We are now on the road for the 9th day, have been in Riga for a riding free day, but nevertheless we have scoured some places of interest on the way. Today only half a day has passed, and I have 2.950km on my speedometer. How many KM would we have unwound on 45 days of pure driving?  Whoever posts the most correct thoeretic kilometres performance to me in the comments  will receive an original Estonian present from me, and I do not care where on this world I would have to send it.  🙂

There, we made it, 3 girls on two Versys and a Duke 390!! came up to this point.
We have travelled the long way here without mishaps,  mostly in nice weather, visited many places, or seen from the way and would only have to drive 130km to arrive in St. Petersburg.  We had only a few involuntary km of road, no falling over or loosing luggage …. And always been happy with our ad hoc booked hotels. Booking.Com App and free european mobile roaming for the win!

Somehow this situation seems so unreal to me and yet, we are really there. 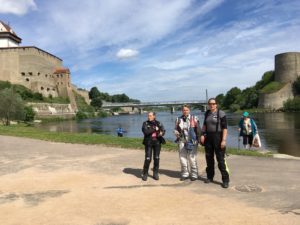 We take this moment with us and turn around. From now on it’s all about getting to know Estonia and the other Wima’s better.

We drive back on the same route to Jöhvi, where we turn south towards Lake Peipus. On the way is the Orthodox nunnery of Kuremaä and there we stop to make a round about the impressive terrain. The whole ensemble is beautiful, both the gardens and the buildings are in a perfect, beautiful condition. 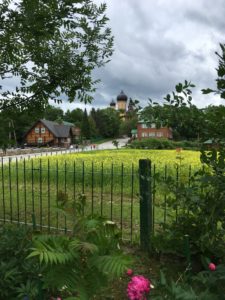 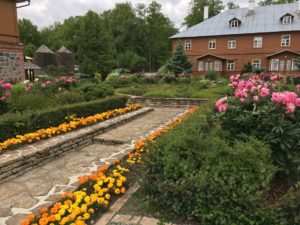 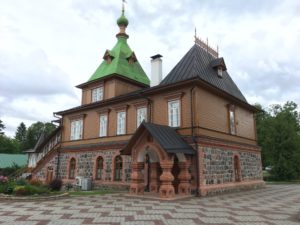 Every now and then an elderly nun is waving through the landscape, and the other visitors also have the classical Russian touch. The whole scene has something like that from Dr. Zhivago and fits so well into the charm of the eastern region of Estonia. 😉

Despite the divine help (yes, we also drank the holy water on the spot) it is now starting to rain.

In the meanwhile used routine we put on our raincoat and drive further south. I recklessly kept the mesh gloves on without pulling the overgloves over it.

After just a few minutes, I realize that this was a mistake. The rain is getting stronger and stronger and the temperature drops to 14°.  The gloves are soaked very quickly, but now it is too late, so heating grips to max. and through. Arriving at Lake Peipus we have to realize that the shore is not accessible. Either the houses of the villages are on the shore, or a dense forest belt prevents access to the lake. So we circle the lake southwards until just before Lohusuuu we see a trunk road that could lead to the lake. 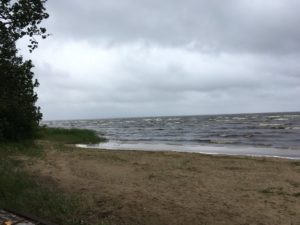 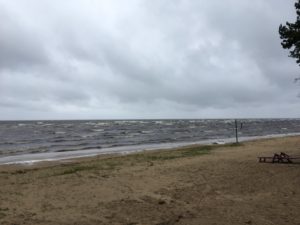 We turn around in the pouring rain and drive back and into the forest strip. Unfortunately, the road also ends about 200m upfront to the shore at a private property. The signs are clear and the black Range Rover with darkened windows in front of the garage brings back memories of various James Bond movies.

But, the whole situation is so ridicolous for me and therefore I simply circle around the property until I stand on the shore of Lake Peipus.

The wind and rain make the lake look like a wide, turbulent sea, ok, the sight was definitely worth it to crawl through the undergrowth.

But now back to the waiting group, which is somewhat protected from the rain in the forest, but of course impatiently waiting.

As the rain is still raining, we turn back into Lohusuu and drive almost directly back to Jäneda. On the way the rain stops and the sun is shining again. Errr, really? 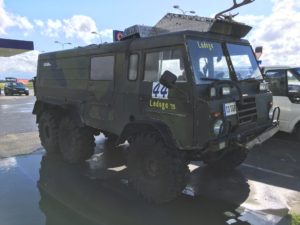 At Aravete we enter the main road again and fill our tanks up to the limit. At the petrol station there is a very modified Austrian Pinzgauer and  a small Wima group that is looking for a gravel road.  In recent years, many Estonian gravel roads have fallen victim to EU subsidies. And as beautiful and important as this is for the infrastructure, it will shrink an enduro paradise. So maps are only relatively up-to-date, but thank goodness I happen to know a gravel track just around the corner.  😉

I show them on the map the approximate start of yesterday’s gravel road and they set out to find it. (and so they did!  😉   )

But we return to Jäneda, now almost dry. 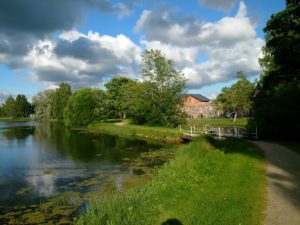 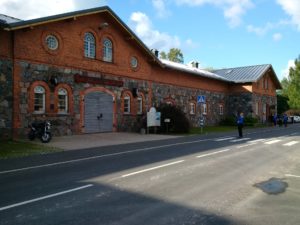 We are back in time for today’s opening evening of the Wima Rally and admire the grown tent city and the many Wimas, from all  countries that have now arrived.

The evening event takes place again in the “stable” and starts with a lot of music, folklore performance, speeches by local politicians and a short introduction to the Estonian language, which, unlike the other Baltic languages, is closely related to Finnish. Yeah, and that’s what it sounds like.  ) 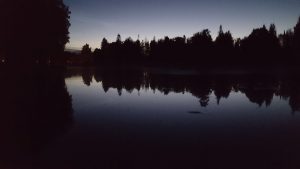 And so the evening finds again a witty end. Even I find in the masses of Wima’s familiar faces from the last rally in Hungary.

For our older members there are again many girlfriends who they meet again and with whom the experiences of the last year are exchanged.

The exact time I don’t know, but since it wasn’t dark yet; -), it can’t have been so late, when I got back to the room and lie down.