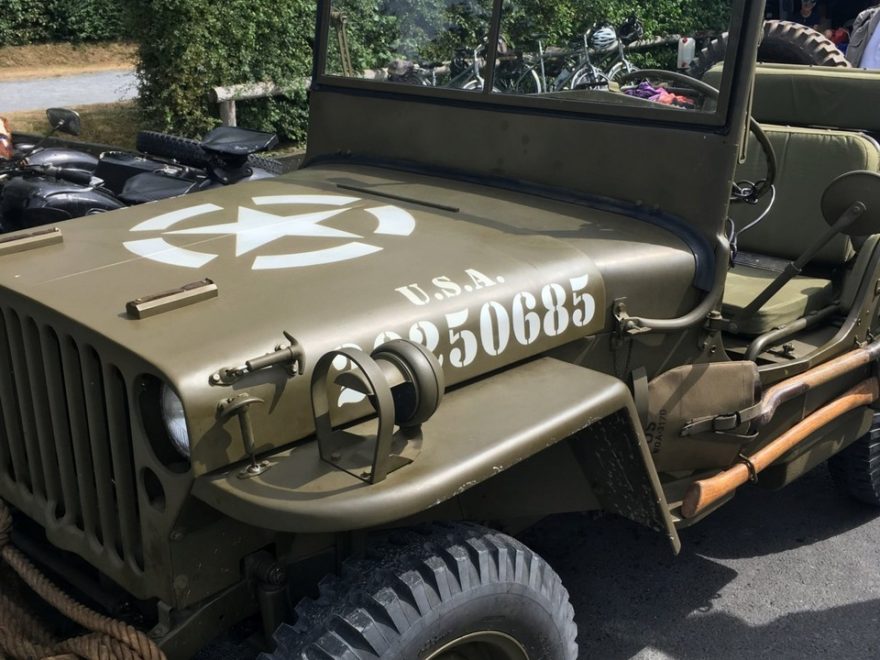 In the morning fresh 13° but no rain!  But there,  is there something like sun!? looking through the clouds?

So I can stow away everything on the bike and get going.
With a 300km day stage there is no stress today and therefore the possibility to do some sightseeing. I was last in Normandy years ago and visited Cherbourg, Ruen, St. Lo, Honfleur etc…, so this year it will be D-Day. After all, it’s 75 years since the liberation of Europe began. This led directly to the EU and to a very calm and peaceful cooperation between the European countries.

Actually, a successful model without ifs and buts. But 75 years is probably a too long time. Some (UK / US) don’t want to know anything about Europe anymore. Others take the values and liberties that have been won for granted and do not even passively engage in politics. (to vote is a won right and not a duty in my opinion).
I am aware that our politicians are neither eye-catcher, geniuses nor rooted  all the time. The values they are constantly babbling about are strangers to themselves.
Making Politics like a  Potemkin program.
And yet, here, on this soil, foreign soldiers have died to give us the possibility for free, independent elections in a democracy, and, how do we thank them? Only 75 years have been enough to make all this obsolete. In my personal opinion, the greatest shame. 🙁

But, okay, back to the here and now:
First I’ll stop at Mt. St. Michel (according to my GPS (phonetic transcription): Monte es te Michel) and the rest in German of course. How come that the Garmin doesn’t even say St. (Saint)?

I would like to change it to French. But then, up to Concarneau, everything is possible 😉
What a pity, so near and yet so far. One day more would have been enough for the extra 700km.
But the sun is shining and the next announcement of the GPS  gets me out of my clouds again. “Plaze de Ekole” and I giggle again. 🙂

So D-Day is the todays program, I will start this after Mt. St. Michel, which I only greet from a distance.

1. I was on the island last time (when I was allowed to drive right up to the door) and now a new bridge (planned by an Austrian!) crosses the bay and protects the bay from the threat of siltation.
2. Like back then, everything is overcrowded despite the early hours of the day. I turn off into the reed belt at a distance and find a shop that allows me to use tables and chairs as a base for a selfie without a f**g stick. 🙄

A few Spanish motorcycles are disturbing my Selfie session. But then they take some pictures of me and the Mt. behind me, and they are wonderful. Muchas Gracias!

3. There is a reason why I am here, although I have visited  here before, but it will be revealed tomorrow, so a little patience.

Back on the bike and in a route close to St. Lo  it goes on over nice roads to the north coast to the “Omaha Beach” and there exactly to the “Point du Hoc”. It is difficult to find a parking place there even with the bike. The parking lot  is very well visited, but despite my paniers I find a place where I can park and  put off  my rain gear – ah yes, I forgot to mention that it rained again?  – I get rid of the rain gear and now walk again in the blazing sun over the cave cliff. It is a multiple  bomb crater and remains of gun shelters are scattered everywhere as well. It must have been a terrible slaughter for both sides.
There is a list of Americans who took part here (and mostly died here too) the photos of single persons – so young!  Still terryfing. The accompanying texts are depressing. I have to leave here very quickly. 🙁

The next stop is for refueling in St. Mere Eglise. Somehow it looks like a parachute is hanging from the church tower? I drive to the church and notice that a life-size puppet  is apparently attached to the parachute.  A view arround shows a huge Airborne Museum that, what else?, also reminds on D-Day.
The paratrooper actually existed, and he survived the war.  Since I am still shaken from Point du Hoc and I have come across smaller monuments and crosses along the way, which also point to fallen soldiers, I avoid a visit to the museum and turn to something much more interesting at the moment.

The market place in front of the church is crowded with stalls, and some of them offer warm food. One of them lures with delicious looking paella and I think to myself: it is indeed Spanish, but the ingredients are from Normandy, so I hit it. And I have no regrets.
The best fast food of my life!  Low price and an excellent taste, come on stomach – what more do we want?
Since I can hardly fry on the ferry,  today the main meal is lunch.
So far the no breakfast, no lunch, only dinner with meat, baguette and lots of water on the way, cure works quite well. I always wanted to try a 17-hour diet, and when riding a motorbike I don’t even notice the lack of food.  Surprisingly no withdrawal symptoms! But no wonder, I sit on my motorbike and let myself drift along the small streets. Today with some more photo stops along the way to capture the landscape.  Nevertheless the track melts very fast, so I add an additional leg to the northeast corner of the planned track.
I find a hill, which even gives me 2 serpentines!  before I reach the top where  I find the church Eglise de la Pernelle. From there you will have  a wonderful panoramic view over the bay of Tatihou, which would probably be worth a visit. The shallow water also shows some mussel beds, which surely extend over several square kilometers. At least now I know where the mussels for  my paella came from 😉

But also Barfleur with the striking lighthouse “Phare de Gatteville” is already visible from here in the distant dust.

I continue my trip along the coast and just follow the course of the road.
From time to time there is short rain, but never so much that I have to put on my rain gear.
I move on small roads, surrounded by stone walls and small hedges towards Cherbourg. It looks almost like England. Probably this was the reason why the Normans wanted to go to England too? I enter  Cherbourg from North-East and  drive along the sea directly into the ferry port and the central Britianny Ferry Office.  There I check my ticket and the departure times once more for safety reasons before I go up to the “Montee des Resistants” or Mt. Du Roule. On the way there  I fill up my tank to the limit. This time a hopefully curing 100 octane sip. Apparently, contrary to me, my Voodoo has spoiled her stomach  in St. Mere Eglise and since then it follows the throttle commands only reluctantly. The 100 octane will fix that. I know her and she trusts me. We have known each other for almost 9 years now and know our mutual peculiarities so well, it almost seems like telepathy. 😉

The mountain that is located at the south of Cherbourg has an interesting serpentine ascent up to the Battery du Roule and the appendant Musée de la Liberation that is accommodated in an old fortification.  Here too, everything reminds on the 2nd world war. But this time, with the perspective of the everyday life of the population and the actions of the Resistance are exhibited.
Unfortunately, many things are only described in French, but the documents and pictures are also very expressive.
As Cherbourg was the first large continental  port that could be used by the Allies, it had a very big importance for the liberation of Europe in 1944, as actually almost all goods for the armies were unloaded and distributed here.
And, quasi as a bonus, from the Belvedere du Roule you  can overlook the whole of Cherbourg and keep an eye on the ferry port.

As there is still time until departure at about 21:30, I can decide between taking a meal or writing my diary.
I buy a snack in a supermarket at the foot of the mountain and drive back up the mountain. So I enjoy the cool ascent twice. Now that’s what I call a perfect home track for practising!
I spread out on a bench at the parking lot and enjoy the view and my petit dîner .
Then I start to recapitulate the day in my diary and review it. Facebook is updated too, and then the only thing left for me to do is to flee from the now starting rain and take shelter at the ferry terminal :-/

There is now also a very cool wind coming up. I look for a roofed and wind protected corner to cover the last hours before checking in.
The day was not very challenging from the KM, but I have been on the road since 7:00 am and had no real break except for the stop at St. Mere Eglise.
So I dawn a little bit there. My Versys is already in the queue (6 cars and a bike in position 5), so I don’t have any rush and the queue is visible from my seat, so I’ll notice it when it starts.
Slowly the queue fills up and as it will be the last day in France, I try to recapitulate my experiences in France.

– The food:  I don’t know, I cooked it myself, the Paela was excellent!
– weather +, – , + whatever that is
– Camping sites o, +
– Roads +, +, +
– Supermarkets +, +
– Gas stations:  Many automatic petrol stations, in St. Mere Eglise obviously bad quality, in Cherbourg again ++
– Car drivers: Very considerate and rather slow on the road. Generally driving in heavy rain without light?
– City names:  Unspeakable and difficult to translate from map to reality. (I usually remember the names of the most important corners along the way, but here: nada
– People:  + , many without knowledge of german or english, which makes communication very difficult. Was better in Normandy, naturally.

At 21:00 sharp, the barriers open and the columns start moving through the stages of boarding, passport control and briefing.
Motorcycles first,  as always, and we land on the upper parking deck (floor 5) with me accompanied by 2 young British motorcyclists who come back from Brittany and are also quite enthusiastic. Although the rain has also raged heavily there.
After anchoring Voodoo I leave it  to look for my cabin. And, quelle surprise! I have a 3-person outside cabin all to myself.
Quickly change cloths and explore the decks before the rest of the pack of passengers enters. The ship is huge and well-equipped with a gambling room, restaurants and shops. But I prefer to finish the diary and go over my plan for tomorrow.
The news from the south of England, which I receive from Elsbeth, our Swiss friend, currently in Plymouth, predict terrible weather. Rain and strong side winds.
So a coastal route as well as an inland route is planned to be prepared for all eventualities.