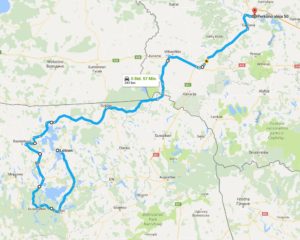 Yesterday I was thrilled by Masuria, the landscape and the small roads were nice to drive. At least with Su and me, because with the Versys a standing driving works very well. In addition, woman immediately sees more of the area, and that is actually very attractive. It reminds of the Waldviertel, only with more lakes, old avenues and even fewer people. So in sum almost equal; -)
Renate disagrees with her hard-suspended Duke and the hard seat, so she has to step off the gas again and again. But she also liked the area very much.
So it was clear to us, after a short voting round, that we are not going directly from here via Suwalki to Lithuania, but we are doing an extra lap.

Since the big lakes in front of Gizycko were only grey in grey because of yesterday’s heavy rain, we decided to make a spiral to the Lithuanian border. This will make the journey to Marijampole a little longer than planned, but it is still easy to make under normal conditions. 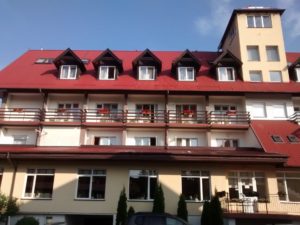 So we get up early and are happy about the nice weather outside, maybe it will be another warm, sunny day for us?

First of all, there is the breakfast, which is once again served in the form of a huge buffet on the ground floor of the hotel in front of us. It’s probably a Polish specialty.
These oversized buffets, with a strong emphasis on the hearty side, are a wonderful opportunity to eat all day long.
And so we always come with a little snack along the way throughout the day.

The hotel staff has been very friendly and courteous since our arrival. This makes it all the more irritating to hear an outraged German pensioner at the reception who complains loudly about the fact that her towels from last night have not yet been changed. And now I want to talk to the boss, who of course you don’t understand German; -)

I wonder why some of our dearest relatives still don’t get this: 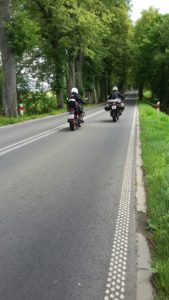 German mentality exists only in Germany – and possibly still in the USA. All other countries have a national culture that can, but does not have to, be compatible.
The nicest sentence is always:”With us in Germany we do so… /would not be possible….” omg, why do you go abroad then?

But back to something more enjoyable, our tour.
After breakfast we turn back into motorcyclists, load our motorcycles and drive out of the yard to head south first towards Orzysz. Just like yesterday, the winding road leads us up and down hills through a mixed landscape of fields, forests and lakes. Again and again we can catch a glimpse of a small pond.

Afterwards we drive around the big lake in the south (Sniardwy) on the relatively small roads, with the farmhouses appearing again and again on the way, and also the old avenues are back again. Then we head north again via Mikolajki to Ryn, and continue to Ketryzn.

This would close the circle with our tour yesterday. But we drive curiously further north through Wegorzewo. We had hoped that buildings from the past would also be visible, but unfortunately the city was only colorless and dreary. So we immediately went back to Goldap, which is already on the border with Russia. enclave of Kaliningrad.
The city is beautifully beautiful and nestles in the hills of the countryside. 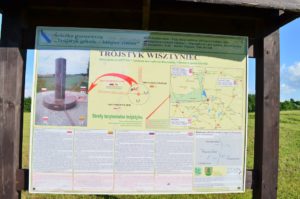 Why are we here, anyway? Of course, first and foremost because we want to go to the Wima Rally in Estonia, of course, also because we want to get to know as many corners and angles of Masuria as possible, but also because we have closed the enclave as close as possible to us – unplannedly – to complete the enclave. The idea originated with our “excursion” to the Polish Spit. Since we drove as far as the stop, we came up with this “crazy” idea. We have planned a reserve day in total, so why not fill it with a small challenge?

This includes a visit to the border triangle of Lithuania, Poland and Kaliningrad, which is situated at the end of a nature park (Krajobrazowy Puszczy Rominckie) that runs along the border.

Therefore, we follow the small country road through the nature park along the border area to Russia, to unexpectedly see the impressive railway viaduct, shortly before Stańczyki. Since the weather situation looks a little bit moody in the meantime, we do without the rocker and only look at it from a distance to drive on.
As soon as we leave the forest, the beautifully decorated landmark appears in front of us.

A number of vehicles are parked on the parking areas on site. We prefer to go on and so we continue our journey.
Very small roads lead us finally over an inconspicuous border crossing to Lithuania. The border sign alone stands abandoned in the area and so we use the peace and quiet on site to organize a small photo shoot. We crossed the great Poland first from south to north and then to west. 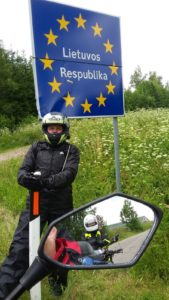 Until our journey home we are now only travelling in the Baltic States!
The landscape changes of the last few days have been manifold, and we are curious to see whether everything is different in Lithuania?

From the border crossing we continue north to Vilkaviskis and from there to Marijampole, because Renates Duke urgently needs a refuelling stop and there is no petrol station. I have a fuel hose with me, which means that we could give her gasoline from the Versys tank at any time, but on foreign territory we prefer to fill her up in time. And, the breaks are also a welcome change from our “mileage eat”  ; -) 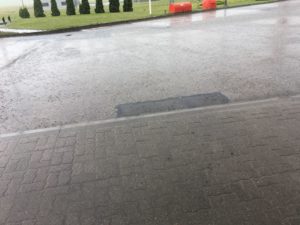 The search for gasoline almost leads us out of Marijampole again, when we finally come across a spacious gas station. The machines are being refuelled by us and just as we push them on the side, so that we can have a little snack break in peace and quiet, the rain falls unexpectedly over us. We quickly push the machines back under the roof of the petrol station and pull ourselves into the salesroom, because the wind drives the rain away.

Since we wanted to take a break anyway, we take the opportunity to have coffee, cocoa and various drinks. Sandwiches add a little bit of refreshing and waiting for the worst of the weather front before we set off again.

The rain persistently comes in dense waves and so we have no choice but to wait for the worst and then, protected by rainwear, continue on our way to Kaunas, where we have just booked a nice hotel room online in the Perkuno namai, above the city centre.

The short drive to Kaunas is humid at first, but soon the rain stops with perfect timing and so we can drift calmly through the urban traffic chaos, dry our rain gear and take advantage of the view of the old buildings of the city. 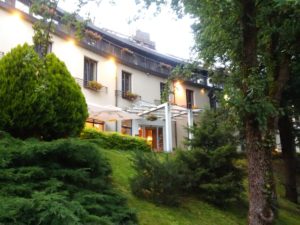 The hotel is actually located on a mountain overlooking the city centre and has a beautiful garden built into the hillside.

Unfortunately, the rain has caused a massive cooling, so we prefer to stay in the restaurant and enjoy the end of the day.
Although it’s getting dark, I still want to stretch my legs and Renate too. Therefore, armed with a rudimentary map, we set off to explore the city centre.

First we go down the mountain through a park and then we follow the pedestrian zone to the west.
Along the way there are many interesting buildings and restaurants, but it’s getting dark and the shops are already closed. 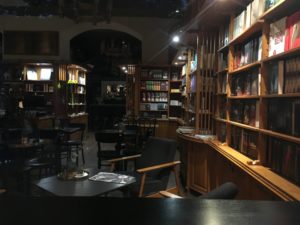 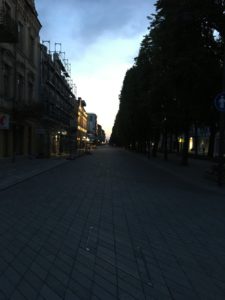 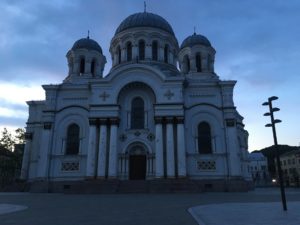 In almost full darkness we turn back and feel our way back up the mountain in the dewy darkness over desolate stairs and paths, until we meet again on the illuminated roads.

Since we have – again – changed our planned route, the itinerary for tomorrow is on the agenda.
The scenic valley of Memel and then, if there is still time, the Curonian Spit? So it’s time to go to sleep, because tomorrow is certainly an interesting day.