Is it the late evening walk yesterday? The time zone change?
Or, just the cloudy weather outside? It’s not easy for us to get up today, except of course Renate, she’s already awake for a long time. We still wonder, how does she do it?
Surprisingly, on this side of the border, there is also a sumptuous breakfast, so it’s more of a northern “problem” and not limited to Poland alone?
But the better, we cherish it and get onto our todays ride. 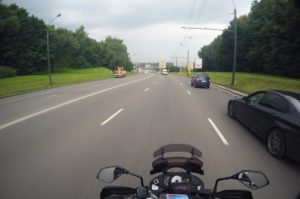 It’s cloudy, but it’s not raining. Therefore we load our motorcycles and start our tour through the Nemunas (Memel) valley in a westerly direction. We haven’t left Kaunas yet, and the rain starts.

Through the experience of the last few days, we have become wiser, 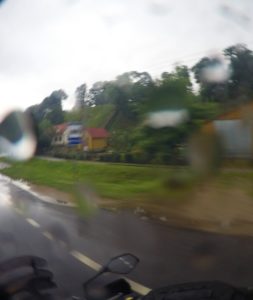 stop immediately and put on our raincoat. A truly wise decision, because shortly afterwards the water comes down in an intensity that still puts yesterday’s rain in the shade. The visibility is reduced to a few meters, but thank goodness there is so little traffic that we simply continue on slowly.
About 1 1/2 hours later the rain finally gets weaker and turns into a regular rain.
It’s a pity, because the Nemunas valley is very scenic and the villages along the way have their own flair. Only petrol stations are rare.
So we drive to Pagegiai, approx. 2 hours or approx. 150 km from Kaunas, until a Milda petrol station nestles on the road as a rescuer in the wet emergency. 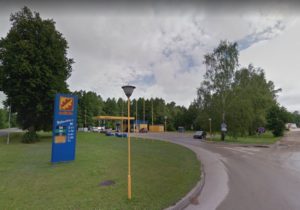 At the beginning the shop is completely overwhelmed with us 3 girls in “Marshmallow costume”, but in the next half hour the petrol station is a dry hoard, with hot drinks, snacks and rest.
We watch the locals coming to the petrol station with their old and new vehicles, filling up a little, but spending much more in the shop. Since Poland, we have also noticed that consumption of food, beverages and “other” goods normally exceeds the cost of refueling by far. Shopping at the petrol station seems to be IN here.
For us hectic people: refuel, went into the shop, pay, get out, get up on the bike, leave! This is a nightmare when goods are still being searched for, food ordered, etc…. But today we have time to observe this calmly and we see that the communication between the petrol station attendant and the customer, and also between the customers themselves, is an important part of the ritual. Somehow this is the information hub of Pagegiai (at least for the men) and radiates a mighty calm.
That’s why we are being sampled like aliens, but also greeted with a smile. Women on motorcycles are probably not likely to have gotten lost here quite often, This is acknowledged with a nodding and here and there also with questions. 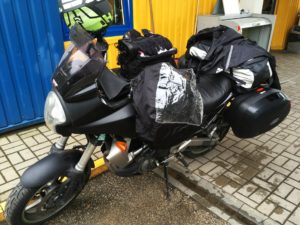 Where from, where to? Alone? These are the most frequently asked questions in English. The vocabulary is poor, in our Lithuanian language knowledge, as well as in the English language of the locals, so a big exchange is almost impossible, but we can understand it anyway – at least I hope, in retrospect 😉
The rain is coming to an end and so we take off our rain gear again 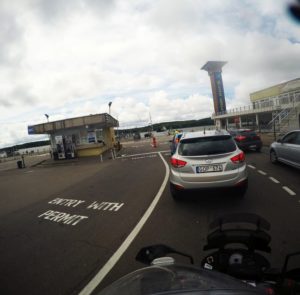 The rest of the route to Klaipeda is remote from the river and therefore not so attractive, and the route also takes an unexpectedly long time: Many small villages, more traffic, which becomes even more intense around Klaipeda, and as a special surprise my navigation system freezes before the right exit/departure to the Curonian Spit. Mistake detected, and blue-eyed into the traffic jam of Klaipeda, and so we promptly almost drove into a barrier zone (the old town). After that we looked for a shady place and started up the navigation system again. Which, of course, brought us to the landing place of the ferry to the spit, in the shortest way.
Together with the other commuters and tourists we pay our fee and are squeezed onto the ferry. On the other side of the river a large construction site awaits us, through which we are still struggling on the first kilometer. In order to end up in front of a toll barrier, where another fee is demanded, before we are allowed to continue our journey on the spit. (No serious sums in total, it’s only a little bit cumbersome to dig up the money)
We continue our journey and have a view of the lagoon and then, after a relatively high dune pass, we have a glimpse of the Baltic Sea through the forest again and again.
Since the tourist caravan in front of us is only stressing, we stop in the middle of the road at a pedestrian crossing (where from, where too, it doesn’t show in the moment) and decide that we are looking for the baltic sea now. The forest opens up quickly and a staircase path to the dunes becomes visible, which we simply follow. 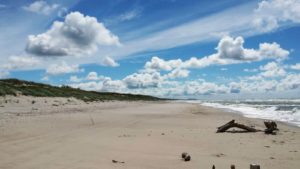 Arrived at the ridge a stiff breeze blows into our faces, the wind is very strong!
Unlike Krynica Morska, there is no need to defoliate, the motorcycle robe fits quite well to the temperature and wind and so we march down the steep stairs to the beach to take some photos again. A long Sand beach, as far as the eye can see, wonderful flowers and plants on the dunes and far and wide (except us) nobody! Wonderful.
We enjoy the view of the high waves and the rushing of the wind. But we still have a part of the way ahead of us and so we leave after about 30 minutes to get back to the engines. 15min later we arrive at the Russian Border. With this we have successfully circumnavigated the enclave of Kaliningrad!

Of course, we take some souvenir photos and then we start our journey back. It was planned to climb a large dune, but there are no parking spaces for motorcycles and all car parks are subject to charges. 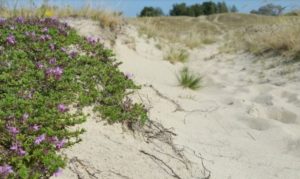 For climbing a dune on foot (max. 53m!) okay, no, thanks.
Su is still looking for souvenirs in Nida, but there is no space for motorcycles as well, so we park in a bus stop fork and wait for Su. We glimpse other female motorcyclists for a moment, but somehow they disappear in a shop from our field of vision, were they perhaps Wimas?
The day is already well advanced and we still have the trip to Palanga on our schedule. Klaipeda was more or less fully booked and therefore it has become the next coast town -Palanga – for tonight.
But first we have to head back to the ferry and there we have a bad surprise: Upfront the ferry a 1 km long traffic jam has formed, and on top of that, regular customers (yearly ticket owners) are driving past us on an fast lane to the front. The temptation is great to drive forward too. But the hatred of all motorists in the queue would probably be enormous. Since there are three of us, we have at least the opportunity to chat with each other, but it still takes an eternity until we are finally on the ferry.
Now, that we have really lost some time, we drive the last part of the way on the expressway to Palanga. 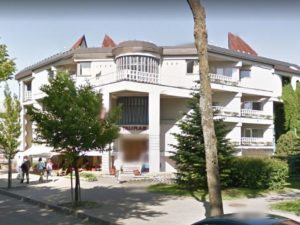 Hotel Tauras is found quickly. This time we have a room on the ground floor again with a view of the car park. Since we have a balcony too, we decide to go shopping and have dinner on the balcony.
In the nearby supermarket, the wall of alcoholic beverages is very impressive, but also sausage, bread and cheese are to be found in many variations and so we stock up and return to the hotel. 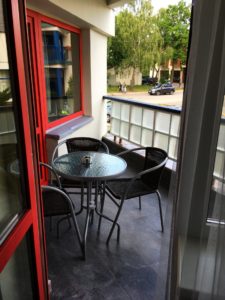 We make ourselves comfortable on the balcony and enjoy the delicious food we have bought.
After that, we’re full to the brim. When we check the beds, we notice that one of them creaks terribly. Since the apartment consists of two separate rooms and double beds, we exchange the beds, because with one person the creaking is almost non-existent. 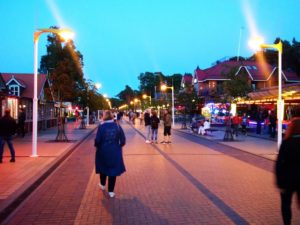 Since the day is still young, we go to take a look on the baltic sea. We know the approximate direction. Fortunately, we find a kind of corso that is dotted with restaurants, souvenir shops and many people. We walk along this path towards the sunset, and right, behind a last hill the Baltic Sea lies in front of us, again. The wind is a little bit friendlier than in the afternoon and with sunset. This is wonderful for us landlocked countries. 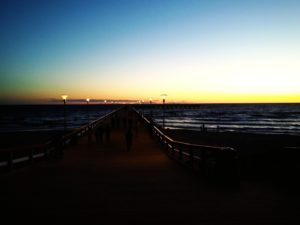 As the breeze is still very cool, we enjoy the atmosphere for a short time and then retreat to the hotel.

Tomorrow we will be back on our planned route. 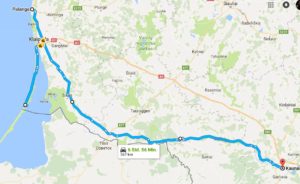