For days I’ve been thinking about what I’m going to do at the WE. 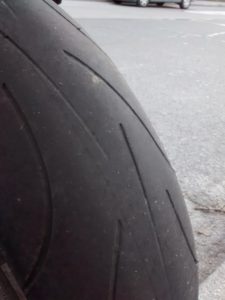 The problem: Sun and heat are announced, but my Versys is not yet in the repair. And so I would have to do ride with a damaged front fender (no real problem as it still holds fast- Gaffertape for the win! ;-)), but also with an almost profilous rear tire.
Yes, Versya was bad in the last year, and the attempt to drive the tire really to the limit now revenges itself.

On the other hand, sun also means: No rain! And if there is no rain, I need no profile at the tire – now, once just  forget about the traffic laws   😉
So risk was weighed:

Will the police wait for me? -> Yes, as the start of the season is to be expected, they will not miss the opportunity for easy prey.
Will it catch me? -> No, as I avoid the usual “biker” main routes, I don’t think so .

Why I then just choose the Kalte Kuchl (translate to: Cold Kitchen, a famous bike meeting point south of vienna) as a waypoint, is, in retrospect, actually a mystery to me…. 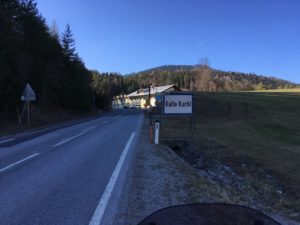 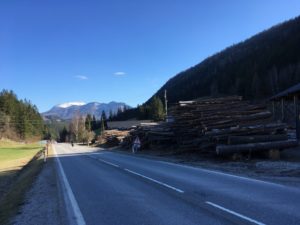 It probably just slipped between accidentally. And since I have already visited it now, I do not have to ride down there for  the rest of the season. Puhhh, thats releaving 😉

Probably I was just too late to get into the catches of the traffic control at all . I met quite a few police cars, but these were obviously already on the way home, when I arrived at about 17:30 in the KK.
There were only 2 motorbikes still on site, so I could go on with my lap.
As expected,  the name was program: It just had 7 ° temperature there and on the further way home the temperature should not rise above 9° again. Definitely not icy cold, but with time, the coolness creeped slowly into all cracks.

The route was all the more beautiful, the roads were for the most part – have I already mentioned that I basically avoid the main routes? – very beautifully cleaned, and the sun, combined with the clear air, colored the sky blue, the wood green, the meadows too. Actually a postcard mood! And so I stopped  – quite unusual for me – to take photos along the tour.

Despite the late start, thanks to  summer time, there was still enough daylight  left to ride home relaxed and go through the last corners with my PiPo 3.
But this week it’s his turn to be exchanged, promised dear race managment!  😉