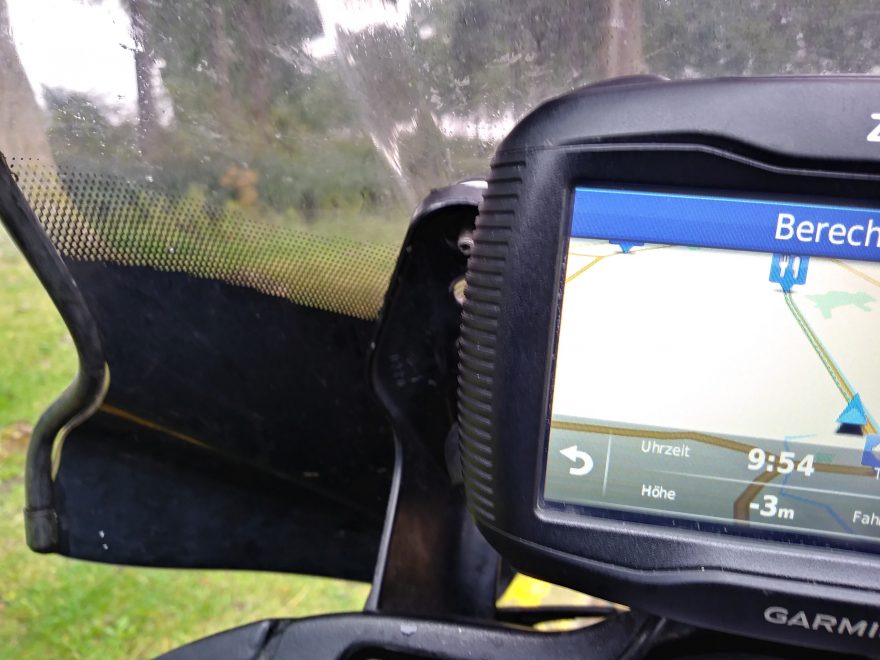 Today, the last driving day on foreign terrain. In the evening I want to get on the train to Innsbruck in Düsseldorf.
But first there is a huge breakfast buffet, Belgian style. That means: English breakfast enriched with waffles. Good, then eat right for the day.
But I have to pull myself together, and at 8:00 I get back with my luggage to the soaking wet motorcycle, which is parked in front of the hotel. Only now I see that I left the GPS at the motorcycle.
Still there, so trusty Belgians.

Normally I would enter the route in the evening, but from here to Bruges it is only a stone’s throw, so I can barely miss it.

Bruges, the beautiful city, owes its splendor to an accident. Sometime in the middle of the prosperous period of the Flanders trade (16th century), its sea channel silt up and from one moment to the next the sea trade ceased for the Bruges merchants. Out of necessity nothing is modernised and so the medieval centre of the town has remained almost unchanged to this day.

I have been to Bruges before, by chance after the film was released: In Bruges That was in 2009, 10 years ago. At that time I was also passing through, but to Normandy. We also visited an English theatre there, which played exactly the  story of this film. The movie I watched after my return was brilliant too – but, as always, only in the original version, otherwise the punchlines get lost.
Ok, but I approach Bruges on unknown ways and also the access to the city center is exciting. Once or twice I pass signs that look a bit like driving ban, but since the Flemish text is impossible to read, I just keep on driving.  As always …  😉
It is so early that I assume that because of the many delivery vehicles driving in the same direction, even the cameras mounted everywhere are not armed. (Quite rightly, as I realize months later)

The exciting question is whether the Brugge Hondje exists again.

And I wanted to hit the waffles again actually, but after this huge breakfast, no chance.
I park the bike right next to the canal, opposite the bay window, which normally had the labrador looking out the window. But unfortunately nothing. Maybe it’s also because of the rain? Maybe it was just too difficult to find an other dog, which mutates into a landmark, lying in the window almost the whole day.

So I stroll through the deserted city centre, recognize here and there already known views and of course, in old tradition, look for a shop with stickers in national colors for my suitcase. Slowly the available space becomes thin   😉

Now it is time to put the navigation system back into operation. First to get out of the city center, and then to get to the other side of the Rhine in the direction of Antwerp, Eindhoven, Nimjegen and Arnhem.

From there it should be easy to ride along the Rhine to Düsseldorf.

While I am programming it that way, I also see Duisburg on the route. Duisburg? Wasn’t there something?
I am almost sure that the 2020 Wima PreRally will take place there. I check it out via the Wima Germany website and its confirmed. So I program the Landschaftspark Nord also on the route.
The route itself is not very eventful.
It rains, it rains heavily, it rains little, it rains… would be a fitting description. Always shortly interrupted with photo, fuel and WC stops. So I arrive after about an 4 hours drive at the Landschaftspark Nord in Duisburg.

In the rain it looks more bleak than in the promotion video. The plant is also almost empty of  people.
So I walk around between the massiv  rusty steel girders, boilers, ladders, coal bunkers, etc… and  take pictures of the highlights like summer cinema, climbing walls, diving aquarium, cafe and hostel. So, maybe I can save myself a visit next year! 😉
(Note: The PreRally 2020 is already cancelled as of today 25.04.2020. For the main rally in Wilnsdorf, 250km away, there is still a tiny bit of hope)

After  this tour I continue in more  rain to Düsseldorf. Now I still have time until departure and Düsseldorf itself does look to inviting for sightseeing at all.
First I explore the site of the car loading station at the main rail station and then I use a place to dry, warm up and continue writing my diary in the Turkish restaurant Izmir.
The restaurant is well visited and the waiting time for the food is a bit long. But the food is sogood. I almost have a bad conscience to occupy a place for so long, but since most of the people come in couples, my single place isn’t that popular anyway.

The staff is (contrary to the reviews  on Google) very friendly and leaves me be:
Maybe because I look so completely wet and cold?
The only thing I could possibly blame the staff for is: they speak such flawless Düsseldorf German that it almost hurts.
I usually try to refresh my rudimentary knowledge of Turkish in such places, but here I only fall on deaf ears.

After 2 hours I am full, dry and filled with the spirit of life again, so that I leave for the loading station. In about 20min the loading should start.
At the loading station there are already several cars and motorcycles, but track 4 is completely free and so I park right there at the start.  Afterwards I chat with the other motorbike drivers. There is also a female rider from GB who wants to go to Zell am See with her partner from Austria. Since the Brexit threatens and her partner might have to leave GB, they want to arrange a holiday and job search (for her). They are seriously considering emigrating to Austria.
The loading starts a little bit late. But this does not hurt at all because of the opportunity for a chat and the sunset.

The wagon with the compartments is right next door and I take it in my usual manner. All equipment is loaded, the diary is completed, the breakfast for tomorrow is chosen. But somehow strange, the train is still not moving?  Sometime, about 1 hour later the train starts, but already quite late. I only hope that the arrival tomorrow morning in Innsbruck will be reasonably punctual.
And so, I let myself, on iron wheels, be brought back to Austria.