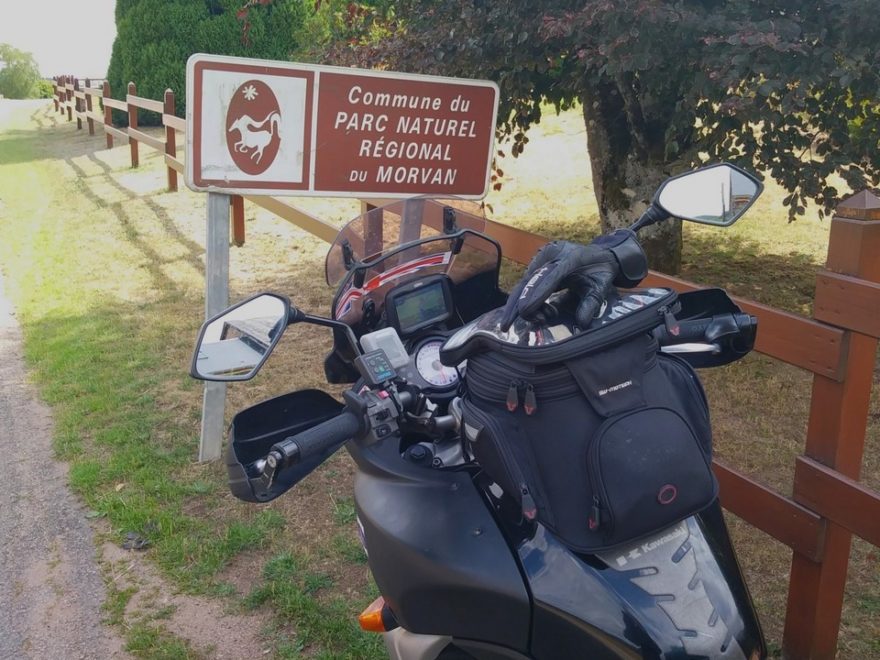 DAY 2  6.8.2019
Ich bin so frei und erkläre heute zum 2. Tag meiner Reise.
I take the liberty of declaring today the second day of my trip.
I am still sitting in the train, the night was mixed and since Dalaas it is raining more and more heavily.
Thanks Arlberg, aargh
I will have to prepare for the worst, but my rain gear is in the tank bag on the bike.
Well, that starts off very well. Very smart Versya, very smart.

At the platform in Feldkirch everything is quiet again and it is only drizzling a little. As it seems, the construction site around the station is the only not pleasant thing at the moment.
Still there is a very dark cloud in the direction to Switzerland, so lets hurry up.

After a while the wagons with the cars and motorcycles come to the loading ramp, then the stairs for the 1st floor are put in position in a complicated way. And, at this very moment, the threatening black cloud, which I hadn’t let out of my sight the whole time, turns into a first order rain shower. Such a crap. Now I have to gallop to Voodoo and then – in the lower deck, in a stooped posture (oh, how I envy small grown women in such moments) – I have to quickly slip into the rain gear, put on rain gaiters, put on over gloves and off it goes into the damp wet.

In the pouring rain I drive to the first gas station, where I want to adjustment my rain gear, this time in an unbowed position, into a perfect position, because one thing is clear: The rain is hard, it is cool: about 13°, and it will take a while until the rain stops again.
In this weather, it will probably good to avoid  the small country road detour to St. Gallen and/or Bern, but instead I will go on the motorway and through St. Gallen, Winterthur, Zurich, Biel into the Parc du Doubs.

There, the rain is slowly getting less and, fittingly, I have to fill up my tank for the first time.
At a small automatic gas station, which is connected to a workshop, I have the opportunity to fill up the Tank again and have a small snack in dry peace.
The method with prepayment of any amount of petrol is a bit unusual, and actually completely unsuitable for motorcycles. Because, with the size of the tank +/- 3l gasoline  make a big difference. But obviously the Swiss are so used to it.

After refueling, and with finally less rain, I continue to the border.
At Col des Roches I cross the border into France, where I am welcomed with SUN!
France is becoming more and more sympathetic to me.

2018 the Wima France Rally in the Alps. In late September there was blazing sun at 2000m and we were alone on the highest passes. And, also now it seems that we can rely on the weather again. At least I hope so.
The temperature rises very fast to 24° C and the clouds finally break up.
Time to take off the dry rain gear, and to get rid of a layer of clothing.

From now on I roll comfortably past Besancon in the north, further on in the direction of Parc du Morvan. There I follow the Yonne up to the reservoir and the camping site Les Soulins .
In comparison to the Parc, the Waldviertel is a clearly arranged network of paths. I hope that my navigation system will bring me out of this maze of small paths, crooked crossings, hedges and farmsteads tomorrow.  But it is very beautiful here in any case…
The campground is small, but has enough space for the surprising guest, with her tent, and voodoo. The grounds man is very sociable and so we chat with a drink about where from and where to. Before I dived into the park I bought sausages and a baguette at a Super Marche. They are now safely stowed away until the tent is up and dinner can be cooked.

The tent is quickly set up, and after a short shower cooking commences.
Soon the delicious sausages are frying in a little pan together with olive oil.
With the fresh baguette and the view over the reservoir it will be a really great dinner.
Afterwards I use the brightness to complete my mini diary, which has become a very important part of such trips for me to reflect on the day and record special events.

Later I check of the route for tomorrow, that’s obligatory. I do have two options:

1. A quick crossing over to Quimper and the next day through northern Brittany back to Normandy and to Cherbourg. That would mean about 1100 km for both days.
That would be feasible and tempting (Concarneau!!),  but no pleasure.

2. A crossing to the west, through the Loire and Cher valley, and then north to the edge of Normandy. And, the next day in zigzag to Cherbourg, where the ferry to Poole leaves in the evening. Additionally there would be time for the Mont St. Michel, the coast and, with the 75th anniversary, the D-Day memorials too. I can skip Caen and Bayeux, I was there only 6 years ago.

Hmm, as it seems I will make it dependent on the weather forecast tomorrow.

For the evening there is a music group at the camping site which provides entertainment. Even the farmers of the surrounding area come to the campsite.
The atmosphere and the music are good, but here France is exemplary, at 10:00 p.m. the sound is off and it gets quiet very quickly on the pitch.
In the night I hear distant thunder and the light rain at the tent; but  I sleep through the night very calmly.

Distance: About 550 km
Weather: Heavy rain and 15° until early afternoon, then sunshine and up to 26°, in the night again light rain