I arrived wet at saturday evening from Esztergom,

Normally the ride would only last 2 hours, but due to the heavy rain and strong sidewinds it was a 5 hour long, exhausting ride. I was really glad to arrive at the circuit. 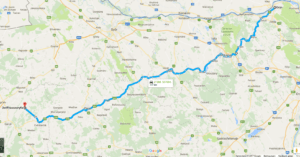 Originaly I had the intention to camp in the tent, but I had decided otherwise, as I was wet and cold, and greatful for a warm, cosy room and a bed.

I was greatful for the space I received, so I could spread all my wet equip all over the (bath)room.

Thankfully, the racing gear I brought with me was watertight packed!!

I went to bed early, without dinner, I was so tired from the exhausting drive here.

So I got up early. And went over to the restaurant for breakfast. There was a fine buffet, but I was so nervous, i barely could eat 2 small slices of bred with butter and marmelade, and black tee.

After breakfast I simply errected the tent, to let it dry and put all the wet stuff beneath, so it could dry too, as the wind was still blowing heavily.

Fortunatelly the rain had stopped and the wind had dried the tarmac.

The temperature had also risen to 17°, so it would be a very well day on the track.

I fetched my my registration number from the Honda race truck (office) and  attached it on the bike. Then I dismounted all the touring gear, turned the mirrors down (as this should minimise the distraction and the following racer would have to care for himself  😉  ) and changed into the racing gear (The same I had for my drift training) 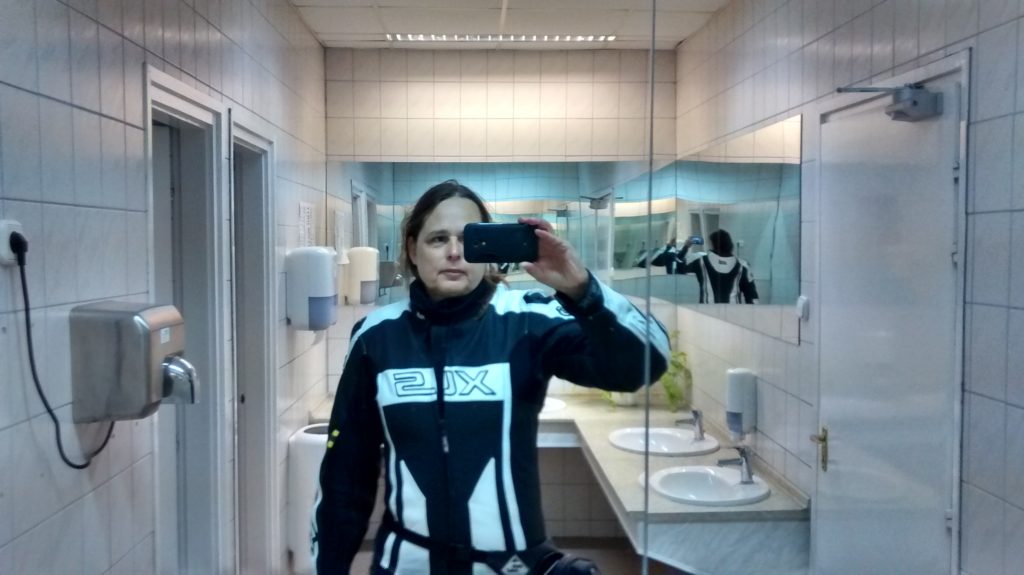 As I was in the beginners group, we got a short introduction

into the does and dont’s  of racing

So be kind to your fellow racers, if to fast dont brake, lean more  :-0, if you want to leave the track raise your left hand and leave the track at the entrance of the box alley. Never went against the general direction (clockwise)!!  I think, that sums it up!

Ah, yes, on further thing:Ttry to start slow, you will be fast enough soon  😉

And then off we go, always in 20min turns and a 40 min break for two other, more experienced groups.

The pictures are from the first 2 turns.

We also had one accident in our group, one fellow rider managed to achive a high sider with his (i suppose) Ducati Pannigale, but for my knowledge without major damage to him or his bike.

I found It quite inspiring to race against men, more expiring though, when I managed to overtake them  🙂  And I did. Huurraaaayyy

Maybe I should look for a Ring bike? My Versys is perfect for the small turns, but on the long sprints clearly underpowered, and I do not want to ruin my trusted bike with racing, as well.

But, for this I will first have to scrape some money, an impossible thing at the moment, with a new job, and an appartment to renovate.

Winter is coming!  Time of games and thrones, but also of bike bargains  , so lets see……  🙂