a long, long time ago, there was the idea to went for a season start ride with the friends in WIMA
As always, when the council of WIMA meets, there were different considerations and opinions to consider.
When does the motorbike season start? In March, in May? Or, as some of the participants cooly reminded: “Never, there is no interruption” so, at least the präsident rose and enounounced with a loud voice: “May it is, and we declare the first weekend as the date for the ride. So be prepared” she said, and the decision was made.
And yet, only one month later it was quite clear, that the scheduled date will not fit with other business needs, so the discussion did start again, and so they discussed happily ever after……. *snip*

Thank god, I woke up from this “nightmare”, right in time 😉
We do discuss a lot of things and do have a lot of chit-chat during our WIMA meetings , but, if the matter is about tours, there is no hesitation to find a decission, so easily an alternate date was found. The first Juni weekend it was, no sooner said then done:

5 happily female riders announced their participation with the tour. And target and slogan of the ride was very easily decided, too : wine, woman and song -> So, it was obvious:

in sum, a perfect planning base!  🙂 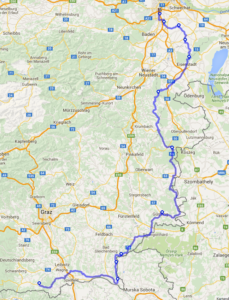 The planned route through the mountains spans over approx. 400 km, so an early start was announced, to have the time to enjoy the day with other things then riding.

oh, lamentation and bitter weeping were oll over the land *snip* , we simply did rise a little bit earlier. 😉 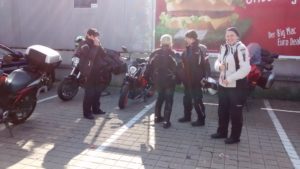 So, we all met at an fitting meeting point in the south of Vienna, perfect for the start of our ride.
All had come, in best mood and competent – as we are – we mustered the new Duke in our midst.

The sun shone with all her might already in this early (9 Uhr) hour and so we did start our engines and Ladies: Let’s ride! 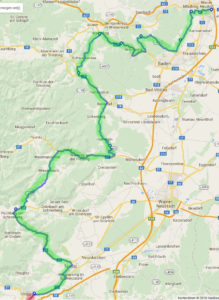 First our route went along the Gupoldskirchner wine hills (Slogan!!) and then we left for the mountains in direction to Gloggnitz through the outer alps. 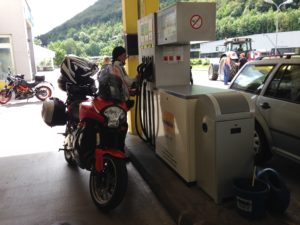 A short tankstop close to Pernitz to prepare for the ride through the further mountains. 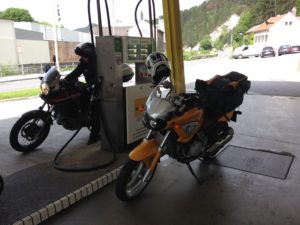 The first curves and kilometers were already behind us, as we arrived at Gloggnitz.

What happend then, you want to know?

Heaven opened and WATER poured out of the sky! *snip* 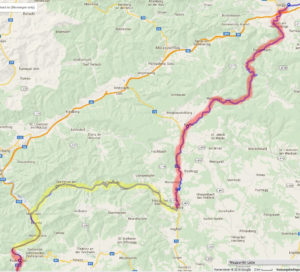 Not only drops, water. Just in time, there was a tank stop and we changed into our rain gear We looked like the 5 dwarfs *snip* in our colorful rain gear and now, well prepared, we mustered all our strenght and headed into the mountains between Semmering and Wechsel.

It was not the first time, that the water tried to spill our bikes from the road with all his might, but our heroines were true and unafraid and so they rode *snip* on. 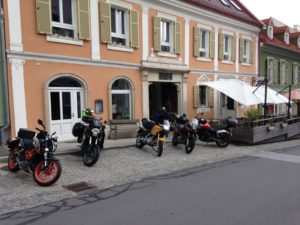 Arriving at Birkfeld, still in the rain, we decided to enter an inn to get some rest and food.

After a meager meal, our princesses were not willing to proceed their wet and ghastly ride *snip* , but a long way and mountains were still in front of them, and even much more important: Curves!, so we started the engines once again and headed back in the rainy mountains.

We crossed the Mur river valley at Deutschfeistritz, only to disappear in the mountains again. And they haven’t been seen anymore…. *snip* 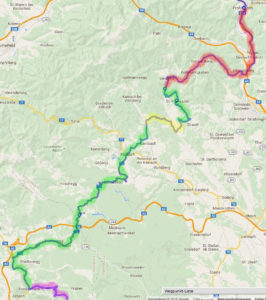 But no, the rain, much more stronger then the last time, tried to frighten our small party, but still some miracle was on the way.
Admist all this rain, on a small hill, there was a church with a wedding party, beautifully clad in traditional garb, and the hill was in the bright sun, Saint Pangrazen was the place, and as it seems the Saint was pleased by our slow pass by, so the rain started to chease shortly after we passed and the sun did shine, again. 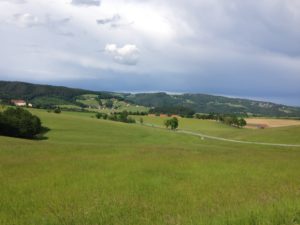 Now we could see the beautiful countryside, and the stud of Piber invited us for a short break along the road to regain some strenght and to drink something too. 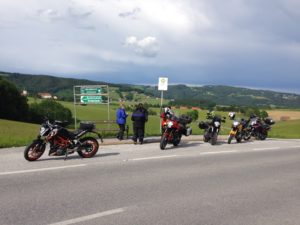 We were not shure, if we should ditch our rain gear, as the sun was shining hot from above, but a short view to the sky showed us, it would be better to keep it on. And we were not disappointed 😉

The next section, over the Pack pass, was a beautiful ride along a very bended road, up and down, it was an real fun to get chased by the BMW, and the

bad Sheriff, in his high castle *snip* was unlucky to have his radar gun aligned in the wrong direction. I wonder, haven’t our engines been loud enough?? 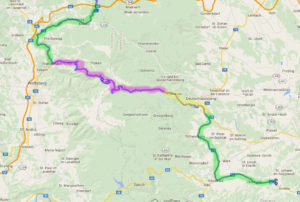 Full of  joy we proceeded down to Carinthina, in direction to Frantschach, were we turned left to climb the mountain to Deutschlandsberg.

We thought of mountain pastures, cows, some abondoned chairlifts, etc.. instead we found: Heavy rain, hail and fog all at once. The temperature dropped down to 9° C, I was really happy to have my handles heated.

The funny part was, that at the lunch break, we discussed the conditions we already had during our trip, and I told them: “Beside of hail, everything we had already“. In my opinion, the recollection of this short episode brought a smile to our lips, it was simply ridiculous!

After this icy kilometers, some snow remnants left and right from the road, we arrived at Deutschlandsberg, and as nothing had even happened the sun was there back again.

We used the sun to get dry on our shortcut to our overnight stay in Krast, the restaurant and hotel 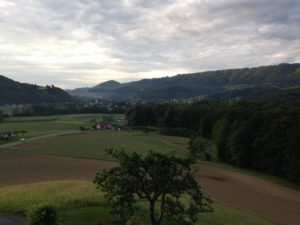 Restaurant Moosmann was our final target for the day.
We were tired from the long (8 hours on the bike, overall) ride through storm and ice *snip*

Despite this, we relished the wonderful meal, personally prepared by the chef himself (a former motorbiker himself).

With a beautiful view from the bed room , along tomorrow’s track we went to bed.

Maybe you have wondered about the different colors along the tracks (you can enlarge them, as the pictures, with a click) there is only a small hint:

Its not a speed-, elevation- or direction indicator, but you will find it in my story everywhere. 😉

Who knows the right answer? Maybe the price is The Wishing-Table? Or the The Gold-Ass, or, at least The Cudgel in the Sack? *snip*