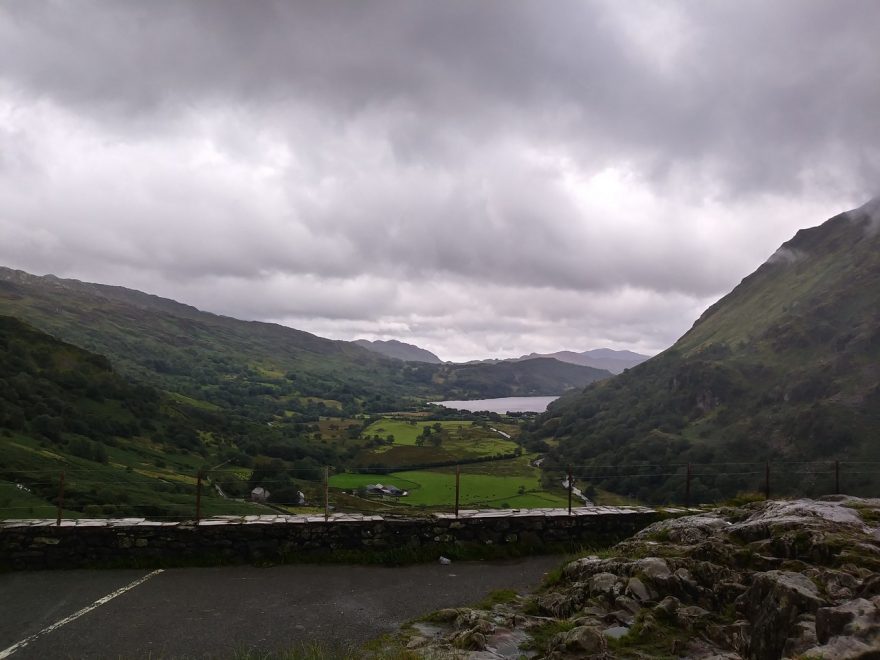 Actually an early “rise and shine” would have been planned, but when I wake up I hear the raindrops on the roof window. A quick look at the window confirms: It is raining again. So, I turn around and sleep a little more. At 7:30 breakfast is announced. There is the whole range of an English breakfast to choose from. But except for scrambled eggs, I only take Continental Breakfast with tea. Also, the milk is surprisingly good. Of course, I started with tea with milk again, when I changed to the left side of the street.

At the neighboring table an English family. The junior, estimated 19 years old,  brag the whole time. It is funny to hear how mature he feels, his argumentation is so convincing, and his parents encourage him in it additionally. It’s delicious. No wonder some Brits consider themselves infallible. This blonde/white ridiculous -haired politician, might have had parents like that ^^

Well, after breakfast, there’s a problem. My boots have been soaked and dried again for 2 days now. Actually I would need some leather grease or good shoe paste before I expose the boots to moisture again. Unfortunately the hotelier has none, so I’ll have to be inventive. I first test a little of the alpine sunscreen that I carry with me (for whatever reason, it was in my tank bag) . The description on the tube speaks little of moisture and much of fat. Hmm?  I put a portion on the boots and spread it generously. There is actually a fat effect. Now I distribute the rest of the tube generously over the boots. It looks like I don’t need any sunscreen for the next days anyway. 😉

A test will show whether this actually works. (Yes, it does).

Then, I do my traditional braid, in national colors, in my hair and another one on my helmet.

Then I wrap myself in all the layers I brought with me (it has now about 3°) and the journey starts again.

Today is the shortest, but scenically also very beautiful route. Snowdonia, incl. Snowden (in case the clouds break up) and then the short plain before Manchaster, before I arrive in the Peak District.

In Snowdonia there are wonderful routes to drive. Unfortunately there are many wet leaves and sometimes branches lying on the road again and again. This makes the fast cornering a little more exciting. But, the asphalt is rough and good, and the Michelin Road 5 is built for such temperatures and wet roads and so we went on fast.

Unfortunately I can’t see the Snowden from the viewpoint behind all the haze and clouds. So I do without the Summit road which could take me further up. Except more humidity and dense fog nothing expects me there. Maybe that is why I have not found any Edward. But it is also quite possible that at least one of them  is still in Russia 😉

The way out of the Snwodonia area is wonderful too. Only from Wrexham on, the English road life comes fore again.  There is a lot of traffic and since the English are gentle road users, they sometimes stop abruptly – despite priority!, to let another vehicles cross,  or let other vehicles in, or out, of the lane.  The fact that I am behind them with my motorbike and certainly don’t expect such manoeuvres (In Vienna Balkan starts, i.e. everyone first through the gap is the motto!) Sometimes I overtake them after the city/village  and certainly do not contribute to a good reputation of Austrias Lady Bikers. 😉

But even here, just before the finish, with already 7 days, and 2.300km distance from the normal daily routine, I don’t manage not to use the road to its full extent.
But, do not misunderstand, I am definitely within the range of the permitted speeds  still.

Now and then there is something worth seeing on the left or right side of the road.
Meanwhile I am a turn around specialist of the many:
Stop! There was something? Turn around and go back, pass it, turn around again and: Yes, indeed! Photo!

So I grope my way further east towards Macclesfield, where my instincts have once again found the right perfect road: the A537. This road – also called Cat and Fiddle – must be a madness in good weather. Running Section Control sections draw a clear picture. But even now, in light rain, the winding road that leads through the highland moor landscape is a treat for the driver, voodoo and the tyres.

Up to Buxton the road swings through the landscape that makes you really dizzy. There is little traffic and so we can really let off steam one last time. Buxton itself has a big gas station right at the entrance to the town. Here I fill up again up to the edge and also a Cadburry has to be bought as well. . Buxton itself looks nice and has a bit of tourist flair, but just enough so that it doesn’t hurt.

The last 15 miles pass by in no time. In Sparrowpit, the navigation system unexpectedly indicates  a small side street on the left within a right-hand bend, and as I have built up a lot of trust in the meantime, I follow this instruction. It is again an almost single lane road, which leads over Winnats Pass directly to Castleton. There I only drive through the small, pretty village and turn at the well marked entrance to the YH.

Along the way running  sheep and then the first tents of the very brave participants appear.

I check in at the reception, greet the first acquaintances and set up in the Austrians room for a short while. Afterwards I ride further on to Hope to finally have something warm and wholesome to eat in the Old Hall Hotel restaurant.
And, now something amazing happens: I have been riding through flocks of sheep for 7 days. Also, on the last days and the last kilometers there were a lot of sheep left, or right, of the road. Sometimes one even tried to kill me by running in front of my wheels and forcing me to make an emergency stop. And now? And now there is “Roasted Lamb with vegtables” on the menue, but lamb is OFF! WTF?

I would probably only have to walk 100m behind the house and there the first lamb would cross my way. But my hunger doesn’t go that far that I’m now storming out of the hotel swinging a knife. And so I try to show my best English attitude.
In the sense of: “Keep calm and carry on” I quickly turn to a “roast beef something” and I am not disappointed when I see the portion and explore the taste.

Afterwards I ride the few kilometers back to Castleton and now the reunion of many familiar faces begins. A lively exchange about where and how? And the foundations for new friendships are laid.