After the arrival at the Rally and me returning from Hungary, I tried as much as possible to keep updated on news and events, as well as pictures from the Rally. Thanks to my kind Wima friends, and WhatsApp 😉
From this perspective, I will try to write this report, despite my absence. (Naturally approved by our whole week participants)

Monday was registration and get to know, get in touch day. The first, and only one, weak spot of this week surfaced at the breakfast buffet: coffee was a rare and precious good for the whole time. But fortunately, Elsbeth, our Swiss friend, managed to put a smile on our faces, thanks to her own-brewed coffee that she kindly offered to us.

During the day, all participants arrived and settled down on the camping ground and bungalows, and then registered with the “Wima Office” on site. As a gift all received a full bag with T-Shirt, chain spray, visor cleaning fluid, folders about Esztergom and Hungary and 2 small sacks of paprika powder – spicy) 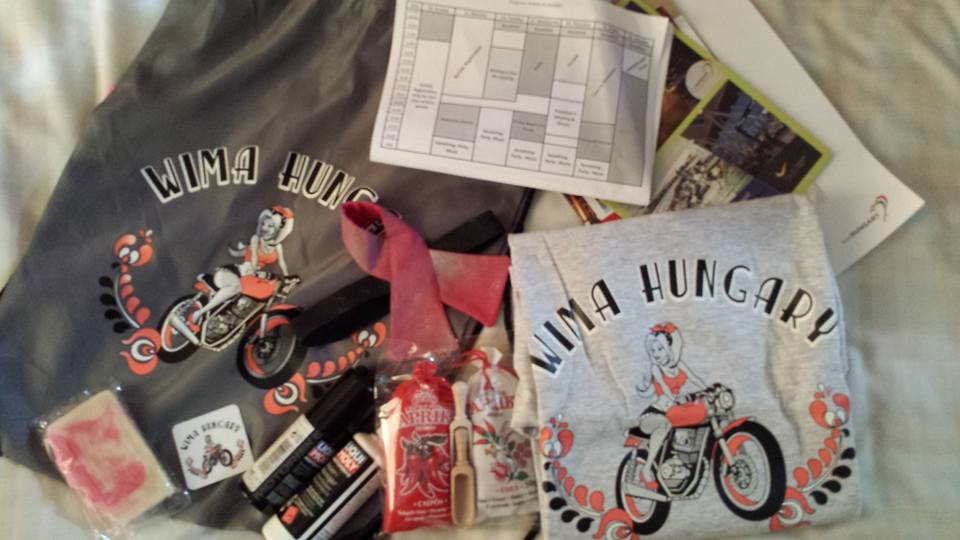 The weather was hot, so the swimming pool was well used to get some refreshment.
In the meantime Lily and Birgit arrived with their van, and erected their tipi in the gap of our tent circle, so now our camp was fully established.
Anneliese was staying in the bungalows as accommodation. 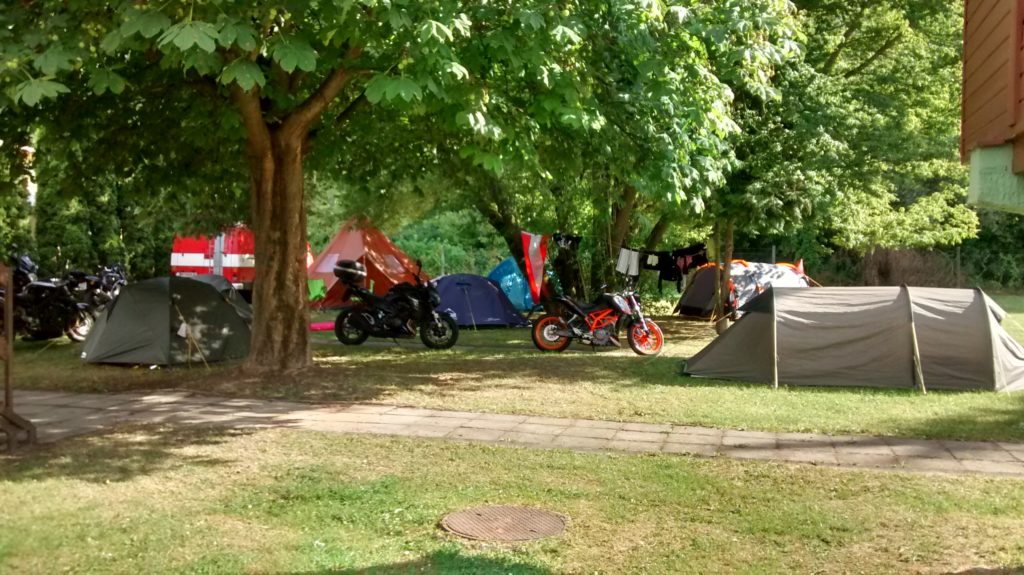 Heidi, Manuela and Simone, our German “Wima-Austria branch” also arrived and pitched their tents in one of the many german corners of the camping ground.

In the evening hours, we were all invited to the welcome dinner, and our experience showed that Hungarians are real gourmets and gourmands as well.
The food was really good and the portions available were huge.

But our Hungarian colleagues know what’s necessary to compensate the food. 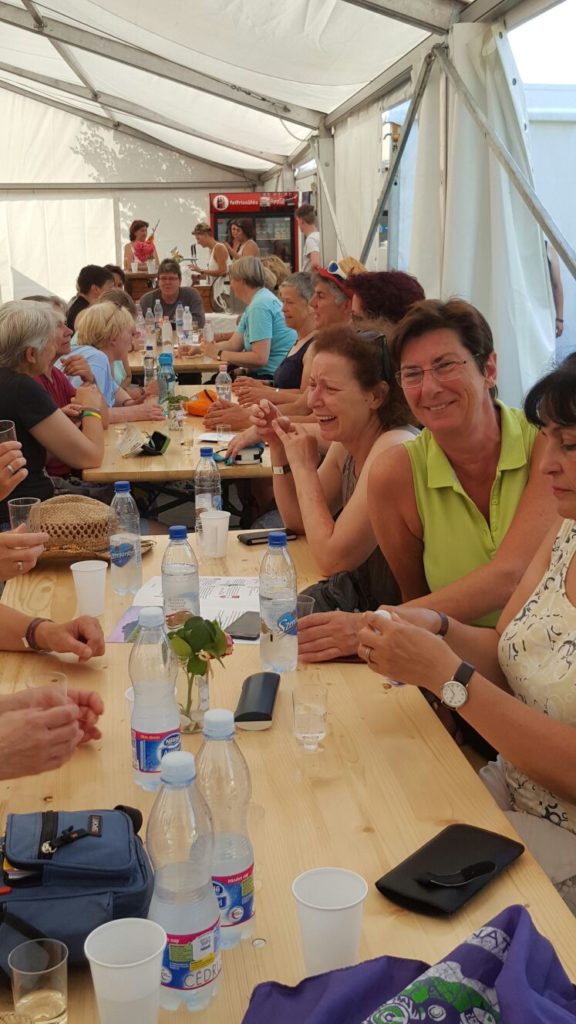 The evenening and the night ended with music and disco sound. J

Tuesday
Naturally, we woke up late, but an irresistible smell wandered over the camp site. It was like wood coal and barbecue and so we were attracted by the smell and ended up around this huge Ox roast- 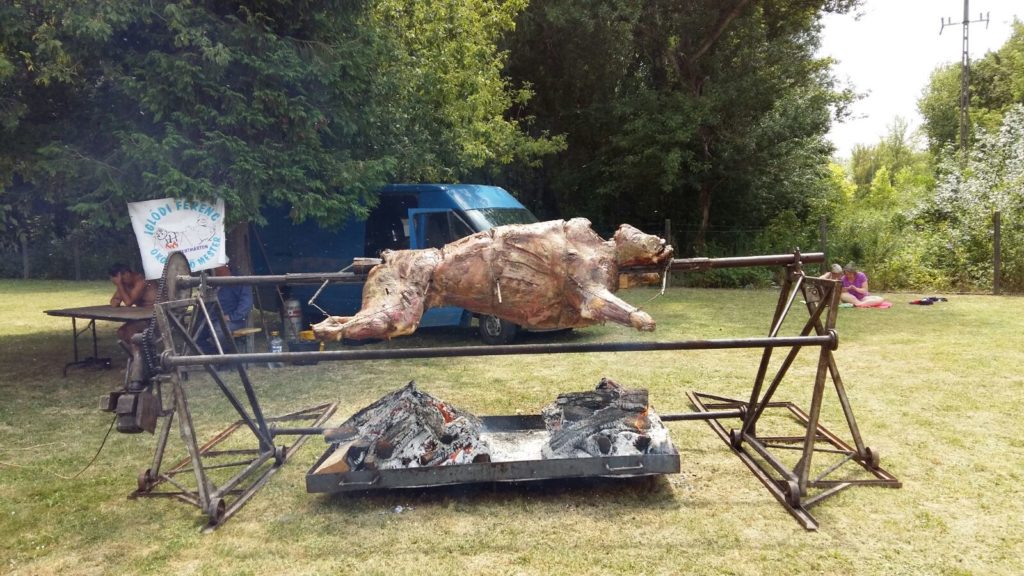 Jep, this week will not be the best for vegetarians 😉

But, there is another kind of distraction.
The tree within our tent circle seemeds to host a million Mealy bugs. And now, unfortunately, they decided to leave the tree and enter our tents.
They were all over the luggage, in every gap, brrrr.

We fought back with insecticide and this helped a lot, but still they were falling. :-/

The afternoon was well spent with the pool and party, and so the night was a little bit longer then the last one.

Wednesday
Its Rally day!
Over the night it rained heavily. Our bikes’ side stands had sunk into the soft ground and were falling over. Berti’s bike even droppped on to her tent, but it could have been worse with her lying at that spot and rain poored into the tent, and her boots were now filled up to the top.
No big damage to the bikes though, only one mirror on Berti’s bike was bent, but still worked.
After this adventurous night the rally started in the morning and some clouds were still in the sky, so we went prepared for the worst.
But, the day got quite a pleasant twist. The rally was carefully prepared and so we get to know the surroundings of Esztergom.
[huge_it_slider id=”12″]

The rally ended at the local HQ of the Hungarian Police (Rendörség).
As a remembrance to killed motorcycle riders  , Wima representatives placed a wreath at the site.

After the ceremony we headed back to camp where we recovered from the challenges of the rally, because the evening challenge is quite as tough.
The prison band gives a live concert at the main tent and the vibes are hot and high. They even treated their music instruments in a really bad manner. 😉 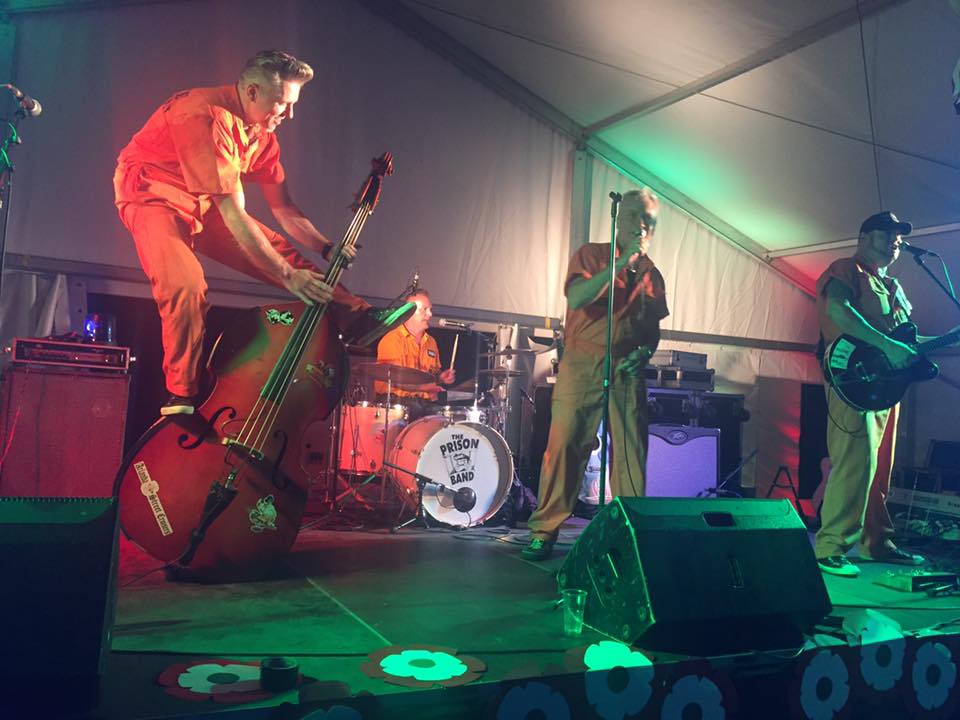 And so, this evening ended, for some of us, really late too.

Thursday
In the morning, it was quite the same situation as yesterday. The clouds were thick, but it’s only raining occasionally and feeble.
So we started for our parade to Budapest, the capital of Hungary. As our parade was under the auspices of the breast cancer prevention organisation, we all carried a pink ribbon. One Hungarian tv station was also present and they are interviewed Claudia Fehrer (our international president) and Emese Melicher (The national Hungarian president) 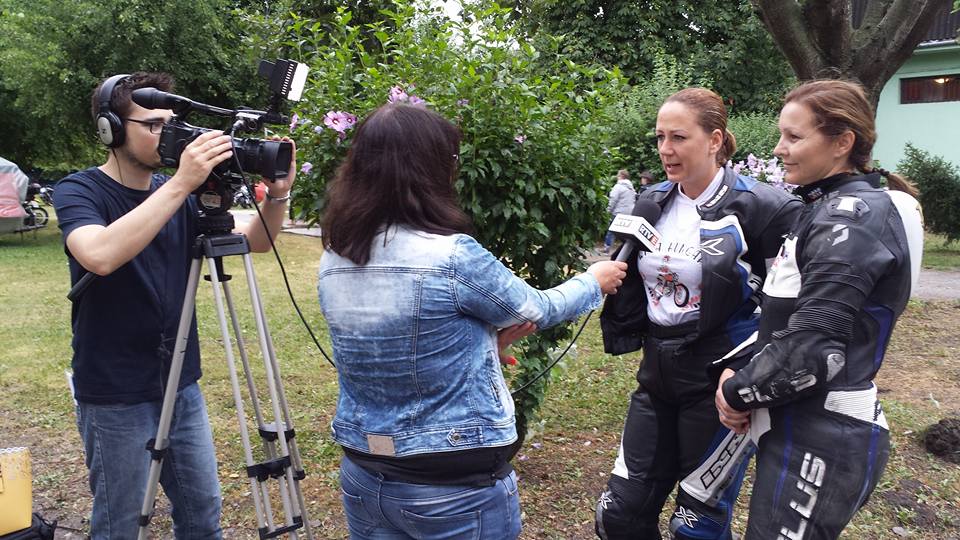 Guarded by a really impressive police escort the large column of motorbikes set in motion and we headed to Budapest. Our police colleagues did a very good job in guiding us through half of Budapest until we arrived to a central square, where the campaigns donations were handed over to the responsible Hungarian representatives. 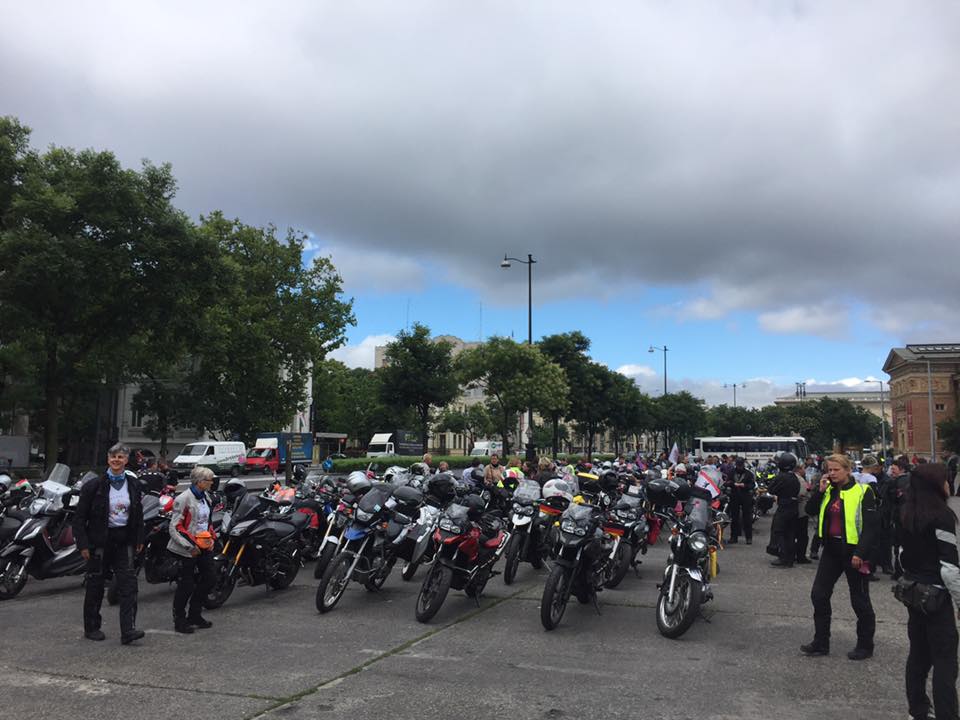 After the ceremony we headed back to Esztergom, always surrounded by Hungarian police officers on bikes. I think, the Budapest car drivers will remember this day with some horror 😉

We were back at the camp in the late afternoon, and so we tried to get some food and something to drink.

In the evening there was the Wima president’s dinner for the national Wima presidents, where they discuss national and international issues, which are more or less strictly confidential, so we cannot post them here in public. 😉

The dinner was followed with the occasional night pleasure: Disco, and as always the night is too short .

Friday
Budapest, wait weren’t we there yesterday?
Kind of, but as we were surrounded by so many police bikes, we hadn’t the possibility to check out the city, itself. 😉
So we crammed together in a few busses to Budapest, there we got a lot of information from the guide, shortly afterward we were transferred to a boat on the river Danube, to visit the riverside as well. And, afterwards back into the bus for further rounds through Budapest. 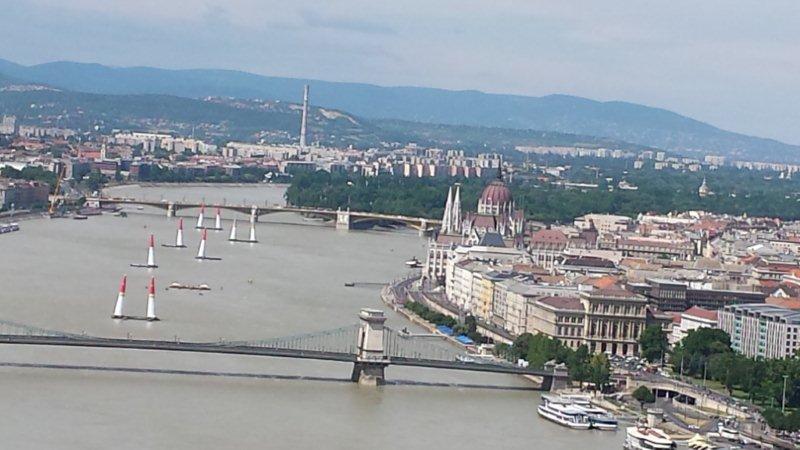 It was hot and there was no time to consume some drinks, or to eat a snack, so we were really glad when we arrived back in the camp in the late afternoon to revive our spirits.

I had arrived in the meantime and already got aquainted with the Mealy bugs and their accompanying earwigs 😉 and I tested the pool, as it was a hot day.

As the others arrived late, there was not enough time to freshen up and pretty ourselves.
All others do had the same problem, as nobody was at the main tent. So we easily sat at our favourite table (as far as possible away from the loudspeakers) once again.

Then the whole ceremony started, all the official announcements, the thanks to our hosts (Wima Hungary) and the introduction video from Wima Estonia for the Rally 2017 in Jäneda (pronounced Joohnada, or so 😉 ) is shown.

http://youtu.be/sXacQMzEhxs
This all lasted a long time, and we were really hungry now.

Finally Emese announced that the buffet is open and the queue started to grow.

But, as always, there was enough for all of us and we got fed more than enough. The selection was fabulous
And it all tasted excellent! 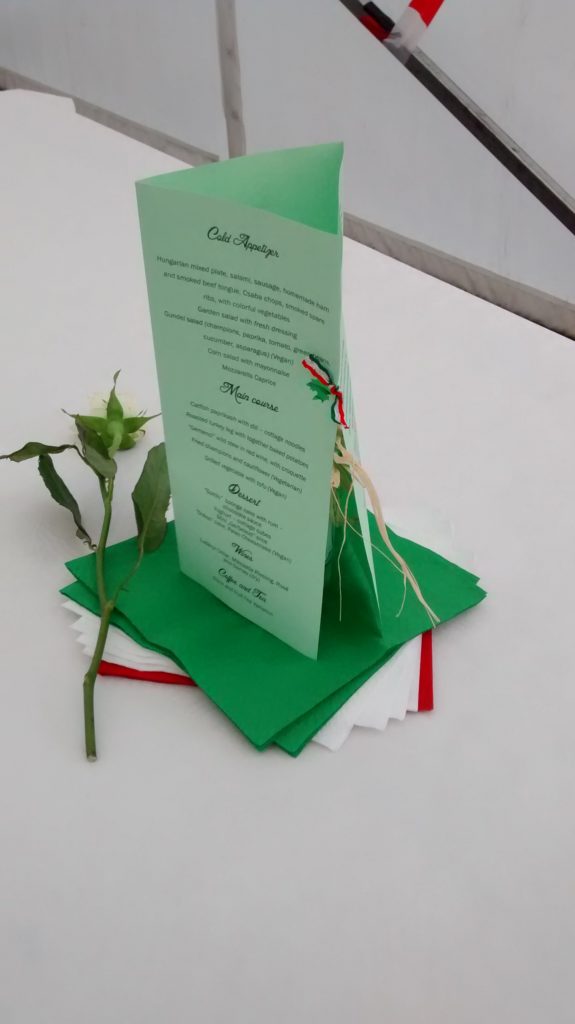 Luckily the disco started and we were glad to do some moves, after all the sitting in the bus and the heavy food load J

A colourful sun set finished the day as night fells in. 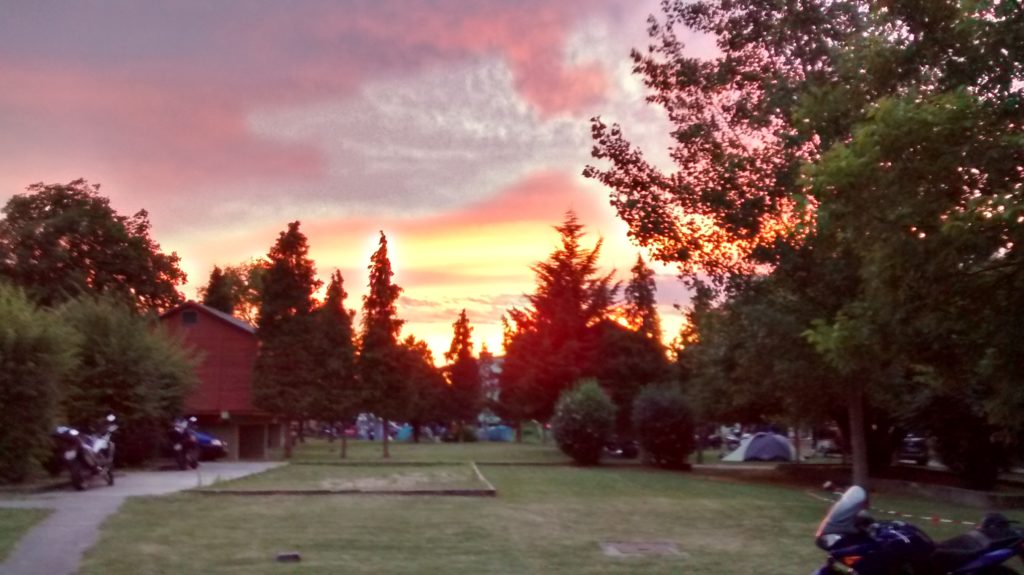 It fitted very well to the melancholic mood we were all in, as a wonderful, inspiring and entertaining week was now over, and we will have to wait a year, to meet again.

Saturday
Ouch, rain started to poor down during the night. It started with a harmonic rhythm, but now it was heavy rain and the dark clouds to the north were not looking promising.
Nevertheless we enjoy our last breakfast, then all paniers are packed up, and the wet tents are folded and mounted on the bikes to.

Birgit and Lily are the fastest, no wonder, as the can use the whole space of their bus. They kindly offer to take the bigger parts with them. And soon after they are leaving the camp.

They are followed by Su, Michaela, Berti and Renate, this group is heading back to Vienna

They are facing heavy rain and strong wind, as all Wima groups heading north.
Thank gods, they all arrived safely.

Anneliese was still waiting for her partner and so did I too, as I will join them on the first part of their holiday journey.
Finally, at 12 pm, Michi arrived at the camp (Border controls and weather were really bad) and so we start into the west in direction to Szombathely.
Anneliese will then proceed further to Slovenia for Holidays, I to the Pannonia Race Circuit for my first race training – as it seems, I cannot get enough of riding!!!!
This tour is quite uncomfortable too, 12° temperature, heavy rain and strong side winds are accompanying us over 5 hours the whole way. We are glad as the we approach our tragets. In Jánosháza we parted and proceed on the final section of our day’s trip.
Finally, we arrive wet but without any harm at ourdesignated targets. 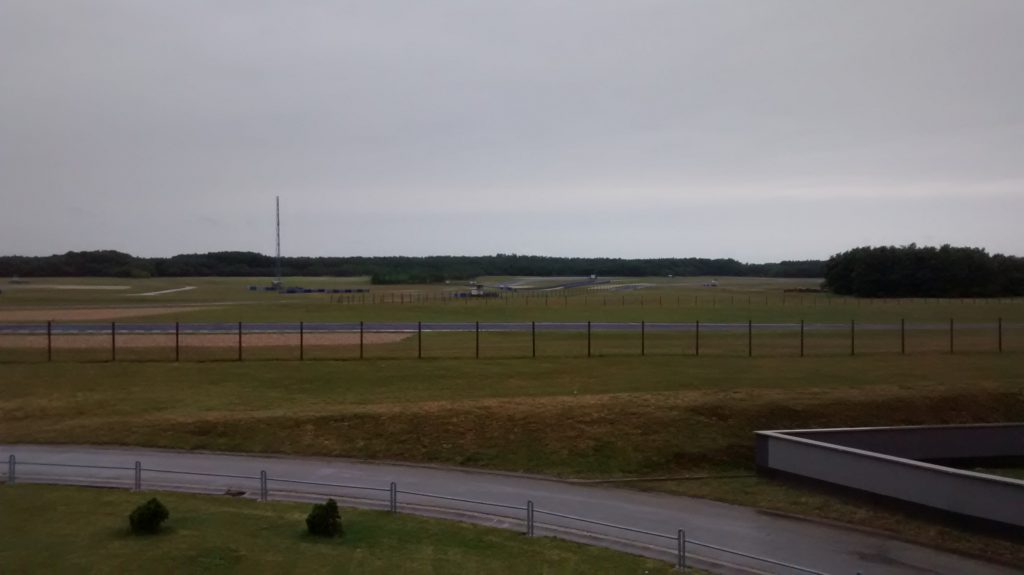 But that is quite another story 😉