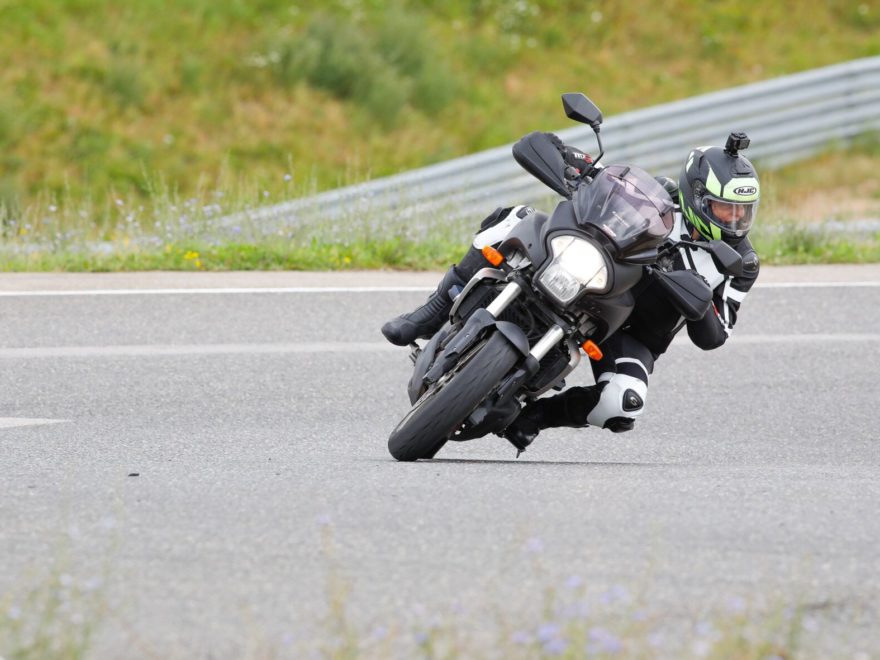 In July 2016 the first Ladiescamp event, organized by the Austrian motorcycle magazine, took place. The event became a success and so it was almost natural that on 2nd July, 6 Wima girls met in Melk, or more precisely at Wachauring, to participate in the motorcycle magazine Ladiescamp 2017. 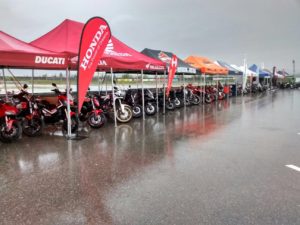 As the first time, in 2016, 100 women met on this day to take a close look at the many stations and test vehicles.
On the basis of the feedback on the preceeding event there were a few minor changes to the program as well as the content of the modules. And, due to the success, even more manufacturers were at site, which provided their bikes for test drives.

The arrival was not necessarily pleasant due to the very humid and cool weather, thankfully the weather situation improved rapidly and the routes were almost dry until the first drive.

All Wima’s had registered for a group and so we went through one station after the other together.
Our group was the red one, and our program ->

We started with the bike test runs, which were twice as long as last year.

This allowed us to test a large number of vehicles in succession.
This comparison option is unique because of the number of manufacturers available at site, similar models are available and the direct comparison is even more intense with an immediate change.

As each one of us has a different taste and driving style, there were in the end also quite different favorites, which we had picked. My top favorits are: The Triumph Street Triple RS and the Yamaha Tracer 900, both surprisingly smooth to handle on the road and a lot of punch if necessary.  🙂
Lottery price needed!!

The next program point was driving safety.
Brake and curve technology. Specifically, cornering technology is a challenging station, but a very well preparation on mountain bends. 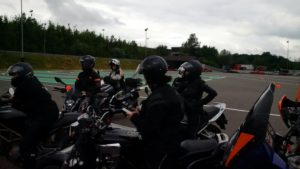 Margot and I used the roundabout to a footrest scratching “chase” of our two Versys. The others did not want to exaggerate it, but the circle was successfully completed by all of us. 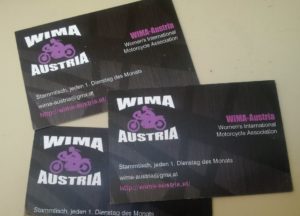 break time was used to get in touch with other women, and Su was diligently spreading our visit cards among the people.
It was exhilarating to hear the good mood and the many opinions on the already completed stations.

The break is used at the Ladiescamp, too, for two different groups alternating on the SuperMoto circuit for some race experience and after a while, it was the red groups turn to start the engines.

As usual, the Supermoto professionals Kim and Steffi were on the road to set the line and the speed. And that was very challenging right from the start. 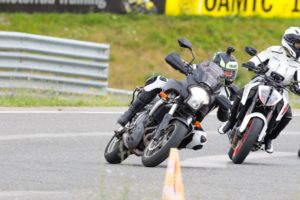 Our small group, however, stayed with us bravely and so we were glad again, after 10min when the first change took place, so that we could a little breathe. A little irritating (turning the view direction to 😉 ) were the photographers who were always placed in strategically good places, but what does woman do, for great photos in slanting position?

The next program step followed immediately: Fun-Experience.
Here are partly exotic vehicles from different displacement classes in use, simply so that woman can try these once synonymous.
In everyday life they are likely to be used less frequently.

Afterwards, two theoretical lectures on the subject of motorcycle travel, safe clothing and hearing protection (as an advertising event, but with expert information)

The two modules were completed:

Offroad, with the Trialmaschine driving between huts standing, over artificial obstacles the machine trustworthy over it, and a short trip into the adjoining terrain with “Steilauffahrt”: -o

And shunting, as well as lifting the machine.
Where many of us were troubled, I took the machine and threw it on the other side with full  elan: oops:

Then, this long and exhausting day was already over again.
Just right, because on the horizon the next thunderclouds emerged on time, which developed again during the course of the return trip to a rainfall. Still, the grin remained in the face. 🙂