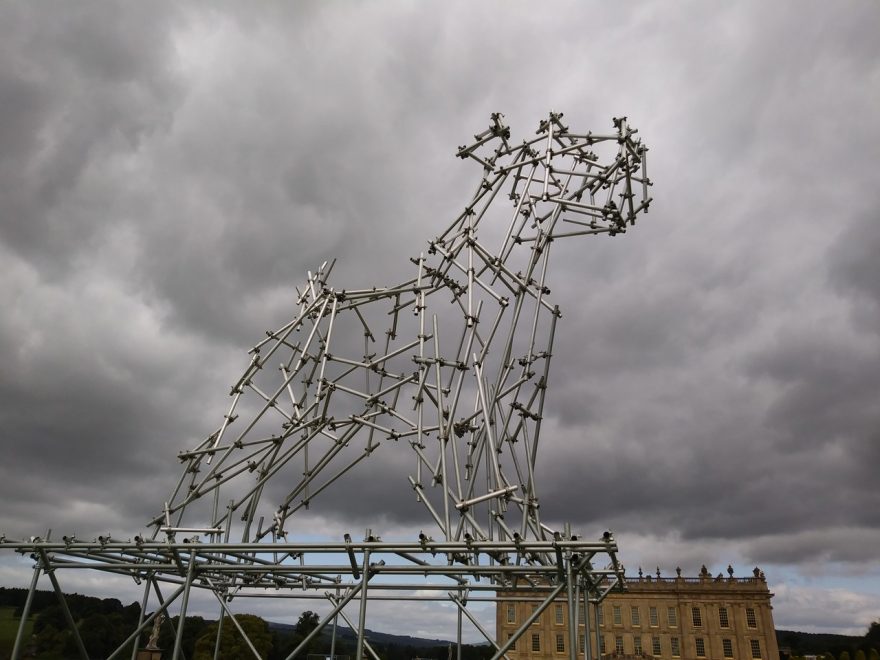 This time I can get up a little later, because I already flagged and decorated the bike from front to back yesterday. I enjoy the breakfast, which offers the range of a British breakfast every day and really leaves nothing to be desired. Only the toasting machine is a little undersized for the normal rush.

At 9:15 the long column starts to line up and of course it is drizzling merrily. At 10:00 it really starts towards Chatsworth House and the rain stops. A Wima wonder!

The Austrian group is almost at the end of the lineup. But this time again I don’t get to ride in the group, because Shona (the British Orga leader) suddenly comes to me and asks me to film the ride and the arrival on site with the GoPro.
Good that the battery is charged and the memory card is empty, no problem.
I take off, but fail at the beginning with the official guide. I don’t remember their organisation, but they were in charge of the driving safety training on the first day.
This guide now insists on strict order in the column, “no overtaking allowed”. All my assurances that I am on my way on official business bounce off him! 😉
As British, they don’t count on my Balkan genes and think that everything is settled. But I ignore him, and then also the other guides. I point to the camera and ride forward group by group.
Because the groups started in 3 minute intervals, I have to use the approx. 25 min. riding time well 😉 to catch up with the leading group.
I almost succeed, only the leading group escapes my Go Pro and so I stand for half an hour at the parking lot entrance.

This is followed by the obligatory group photo in the impressive setting of Chatsworth House.
The program then includes a visit to the manor house and garden (park).
The whole ensemble is quite nice. The Dukes of Devonshire are obviously not poor. Strange only, Devonshire is not exactly around the corner, we are in Derbyshire. Actually I only saw Devonshire in the rain (Link).
The whole house contains an exhibition about the dogs of the Duke’S in pictures, sculptures, dog care accessories and stories about the centuries and ends with a gigantic Fox Terrier in the park made of scaffolding elements.

The weather has become really nice in the meantime.
Therefore I visit the extensive park first,
Use the fountain to get a rain photo (and get really wet!) .
Buy me an ice cream with a gigantic chocolate stick (very good!)
And stroll through the extensive park.
I always meet other Wima’s who do the same

It would be a shame not to take advantage of such weather, so on the way back I take an extra loop over the Snake Pass and on the way back I pass the Blue John Cavern.
My chain rattles alarmingly and to make matters worse the oil reservoir of the chain oiler is almost empty.
Therefore I stop in Buxton at a bicycle store to get myself a toilet oil (especially for humid conditions).  I have enough tools with me. That will still take revenge, but unfortunately I do not know that yet. I console myself with the thought of my tools and the tools I took with me.

Back in Castleton I start with the chain tensioning. Normally a thing of 10min, but Surprise!The chain tensioner on the left is 13mm, on the right the standard 12mm. In addition, the left one is somehow stuck.
Perfect! I start by asking colleagues if they have a 13mm key, but Nada.
So there is only one thing left to do: Remove the rear axle so far that I can finally loosen the screw with the brought socket and treat it with WD40.
After a few times screw in and out and drown in WD40 until it is finally possible to move it with my small water pump pliers.
After that I have to get the rear axle back in position before I really start to tighten the chain. After about 1 ½ hours I am finished- In the truest sense of the word, oil soaked fingers included.
At least:  Job done! First I did back in Austria -> 😉

Afterwards the Austrian Wima has found a nice place while we are waiting for the BBQ to get started. Champangner flows in streams and then the BBQ grill is stormed. Not that we have starved, but the smell is very tempting!
Afterwards we flee from the cold inside and continue to party there.

At about 23 o’clock we have to say good night.