There’s only two of us this time.

Carmen and I, so it’s probably a good match.

We don’t have much time either, after all it is already 11am, when we start from Vienna and we want to ride to Grein for an ice cream, and we want to be home again before dark.
Grein is only 140 km away from Vienna, so where is the problem, you might ask?The “problem” is actually only the number of bends we want to master.
For this we have chosen a relatively spurned area. This guarantees: few cars, few 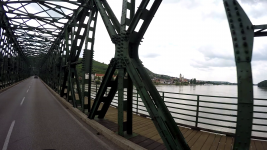 motorcyclists (until the final) and therefore unlikely: police officers on the lookout.

In short, our plan works, we make almost undisturbed progress on winding roads, and the last straight stretch of road, the Mautener Donaubrücke, has been behind us for a while. 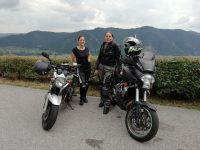 The sky is cloudy, the temperature is more fresh than pleasant, a little more layers of cloth wouldn’t be bad now, and we’re heading for the ice cream cup!?

Thank God this will change as soon as we move from Lower Austria to Upper Austria. Suddenly it becomes brighter and much warmer. Ice cream here we come!

But, first we do stop a the bear rescue center in Arbestal. 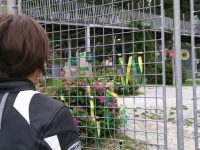 The last part of St. Georgen am Walde is a bit notorious with bikers, so this stretch is limited to 70km/h for motorcyclists. Even if we wouldn’t drive the great corners much faster anyway, this is another senseless action, just because a few madmen with noisy pipes and knees on the ground probably drove too much up and down here. 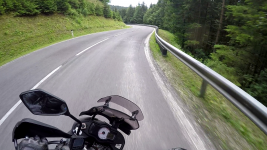 No matter, as said, we are not much faster anyway and therefore we head south to the Danube and Grein for the last 35 km.
In Grein itself the popular pastry shop is already completely overcrowded, several dozen motorcycles are parked in front of the house, but we get a place with a view of the Danube. 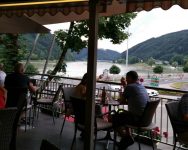 The ice cream is ingeniously good, some things have changed for the better in the last few years, and so we sit for quite a long time. That’s also because we’re really dizzy and we almost have a headache. So many curves in such a short time, no wonder!
At some point, however, it is time to leave and so we went back through the Nibelungengau, into the Yspertal, then

Weitental, Melk, Dunkelsteiner Wald, Heiligenkreuz and into the finale leg to Vienna.

Sucess! But, where do I get headache pills now?