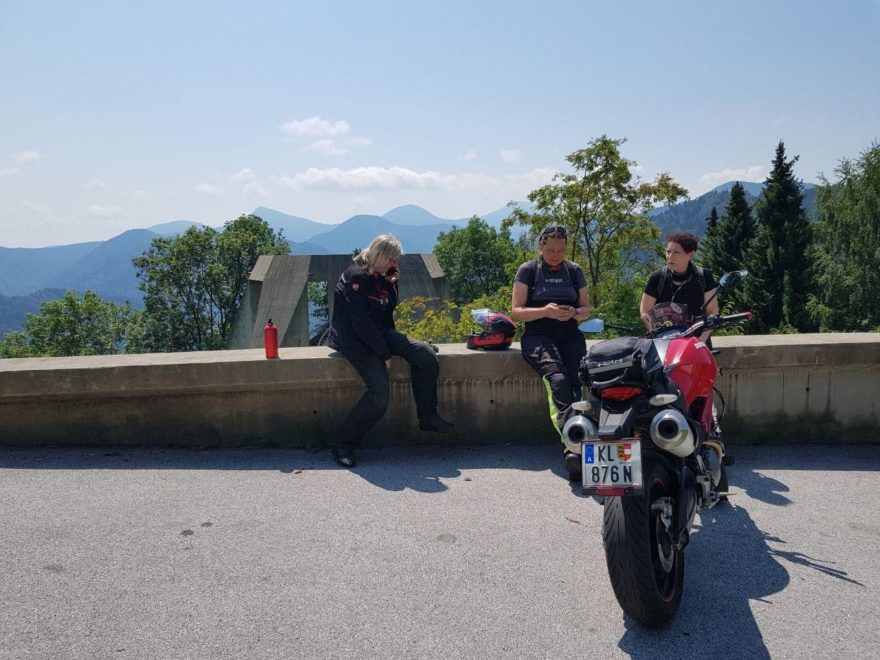 A fiasco.
But it started so well! It’s the last day when we can all be on the road together and so it should be a nice tour through Slovenia and via Vrsic also into Italy before we want to head back.
A punctual departure in Gmünd and on time at the meeting point in Eisenkappl. But there is the first change of the plan: Renate and Sabine are already on the way, but not yet on site.

After a short consultation, the meeting point is moved to the Seebergsattel, and so we enjoy the many curves over the empty pass and are thus at the pass summit in no time. This time there is no concrete barrier blocking the crossing to Slovenia, but we are still waiting for the rest of the group. But Karin is already there!

I use the time to let the drone fly and this time capture the crossing on film.
But the next bad news does not wait: Renate and Sabine will be even later. It’s not quite clear whether its technical problems with Renate’s bike now, but that’s actually not important.
We agree to just keep riding slowly and give them a chance to catch up.
So we slowly start moving towards Kranj.
There the next mistake: Instead of turning off into the valley to Jesenice, my Garmin (which has been faultless so far) decides to climb the southern mountains. Since we have a head start anyway and such hooks happen again and again, I allow it.
So we land on beautiful little mountain roads and drive further and further into the southern mountains to Drazgose where we at least make Karin happy.

The viewpoint I choose for a stop, a war memorial, she has been looking for it for a long time because it is a dear memory. But my band of sisters is beginning to grumble. It is very warm and the tight curves are more strenuous than expected. Besides, there is something fundamentally wrong with our course. We are definitely too far south, if we continue like this we will come out in Trieste
This means that the navigation system is now set to the fastest way, after all we have to meet Sabine and Renate first, who have caught up in the meantime and are now waiting for us.
When the change to the fastest route doesn’t work either – the roads become even steeper and climb even higher – we switch to Google maps. Quasi – help get me out of here – emergency programme, And so we land again, in a big arc, back in Kranj?
OK, that’s it, we’re now only ridingin the direction of the Loibl Pass with its hairpin bends –
At the border we are stopped by a few recruits from the Austrian army. Nobody is to be seen except the soldiers. It is understandable that in times of a corona pandemic border controls are carried out. But it is less understandable that motorcyclists with Austrian number plates are meticulously checked, while cars with foreign tourists are waved through with a quick glance into the vehicle.
It is hot, it is tedious to peel the passport out of the gear, and then this maneuver.
I’m so angry that when the check is over I go full throttle, leaving a black stripe behind and only in Unterloibl do I slow down again and wait for the rest of the group.

Actually it’s enough for today, but since the Pyramidenkogel is on the way back we stop there for a short while to enjoy the view over Carinthia and Lake Wörthersee.
But then we only go home in Gmünd.
After a shower and a cool drink the world is back to normal and the evening comes to a wonderful close. The moral of the story: without good cards, don’t ride.! As you can see I bought a few after my return home, only a few. 😉

Tomorrow I’ll be going home again, the rest of the group will go back to the Dolomites.