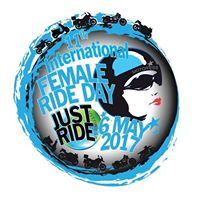 The IFRD (International Female Ride Day) was introduced 11 years ago by a female Canadian motorcyclist who wanted to bring motorcycle-riding women together, and to make a statement.

Even if her homepage has become very commercial over the last years, the idea has become autonomous and worldwide women’s motorcycle clubs use the first Saturday of May, for a joint tour and coming together.

This year, our small party counted 9 riders. So, finding an agreement on a tour is correspondingly somewhat difficult. 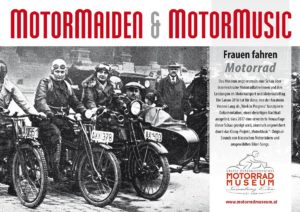 But, in this case Renate, who had picked up an information at the Seiberer MountainRace, about a special exhibition: MotorMaiden, at the 1st Austrian Motorcycle Museum, did have the right input for us.

So, the target of the tour was fixed, the route planning that followed was relatively relaxing, so the tour could start! 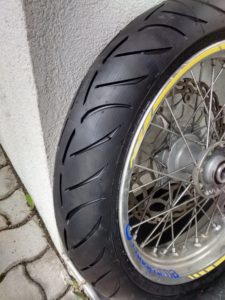 My little misfortune with the broken footrest mounting plate had provided Juniors SuMo with a new front tyre (a Metzeler M7RR), as i didn’t wanted to travel with an almost zero millimeter profile 😉 .
I fetched the tyre on Friday, at Zweirad Pauer. The change was done in 15 minutes, the quality of the work faultlessly, the price …. oh, well 😉
Will the virgin tyre keep what it promises?

So, 6 May, early – around 9:00 😉 – there was the first meeting point in Hütteldorf, outfitted and on time the first Wima Bunch was there.

So we rode on to Untertullnerbach, to the second meeting point, and even there, despite tankstop, all the Wimas were ready in time to leave at 9:30 am.

We rode on through the beautiful Irenen Valley, to Tulln, where we had our 3rd meeting place (!), for our northern area members.

Still, punctual to the clock, we did set off again and headed along the Wagram to Langenlois and to continue north, along the Kamp river.

Then, we rode north, along the rounded bends of the Kamp, to Gars, where we turned to Sigmundsherberg and soon reached our destination at the Motorcycle Museum.

Lily and Birigt were (as native Waldviertler) already at site and so we could theoretically start with the visit of the special exhibition and the rest of the museum.

But, only theoretically, as we had to pass a JukeBox and it took it’s toll. A few classic earwigs were released before we actually went on to the small, but fine special exhibition.

Mr. Ehn was well-informed about the relevant epochs in austria, and motorcycles anyway. 😉

This might be the reason why the Wima Founders were not on the radar, as they started in the US and UK first.

After the visit of the museum we went to the Restaurant Surböck where the Innkeeper offered us a wonderful ambience and good cuisine at very reasonable prices, in the garden.

Well fed and refueled we wanted to head back to Vienna. 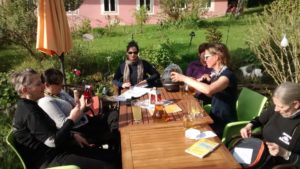 But, Su had a quite better idea and so we drove along the Kamp to Zwettl and from there we went  south via Ottenschlag, Pöggstall and Weiten to the Danube river, where we crossed at Melk and rode into the Wachau region.
At Schönbuehl we took our last stop, at a friends of Su rest station, and enjoyed the wonderful sun.

In the meantime, it was getting quite late, so we mounted our bikes again very soon , to get closer to Vienna via the darkstone forest and the B1.

My reserve gas light lit up at the foot of the Riederberg, but the tank still covered the 15km to the finish line.
Hip hip hurray for transparent petrol tanks! 🙂

And the tyre? The Metzeler M7RR? Attentive readers will still ask ….

Never before has a tire impressed me more right from the first minute.
Very high class, it conveys a great feeling in the curves and a great stabile run on the straights, despite the hypernervous Husaberg.

It’s grip is magic, I even managed to do my first short stoppie as i had to break surprisingly.
Yes, I confess, I was distracted from the wonderful scenery at the Dobra  barrier lake. 😉

I didn’t had the opportunity to test it in rain (thankfully), but if the reviews are right (as I assume from my experience in dry state) , then the tyre is worth further consideration……

Finally, the tour we rode: 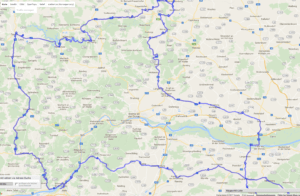